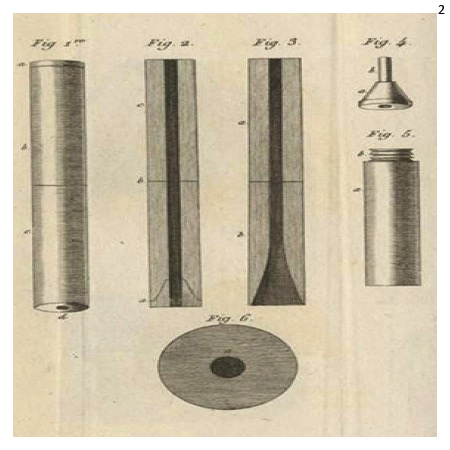 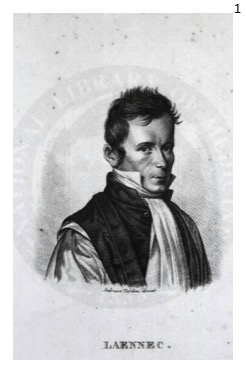 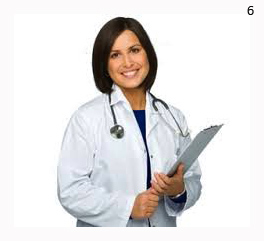 There are not to many instruments that were invented 200 years ago and are still in use. One notable exception is the stethoscope. This year celebrating its 200th birthday, the stethoscope remains a permanent fixture around the necks of the majority of today’s clinicians.

The stethoscope was invented by in 1816 when a young French physician named René Theophile Hyacinthe Laennec was examining a young female patient. The invention grew out of the necessity of modesty as Laennec, so the story goes, was trying to listen to sounds emanating from a young women’s chest, but was reticent to use “direct auscultation”, so to preserve modesty. As such, he rolled up 24 sheets of paper forming a tube so as to conduct the sound.1

Laennec spent the next three years experimenting with using different materials to make various configurations of tubes, the predecessor to the modern day stethoscope.2The term stethoscope comes from the Greek word stethos, meaning chest and the Greek wordskopein, meaning to look at.3

There has been much debate as to whether the stethoscope still has a role in modern-day diagnostics. For example, Cardiologist Eric Topol recently tweeted “The stehoscope’s 200th birthday should also be its funeral”.4 Undoubtedly Topol was referring to the notion that modern-day diagnostics for heart and lung conditions come from imaging techniques, and not from what we can here through the stethoscope.

However, others disagree.  In an article by Larry Husten in Medpage Today,5 reference is made to an editorial in the Journal of the American College of Cardiology, where esteemed cardiologist Valentin Fuster warned “against over-reliance on advanced technologies like ultrasound: “As clinicians, we need to continue to interact with our patients, listen to their histories, their lifestyles, and their bodies — the last of which is where auscultation continues to play a dynamic role in our daily practices.” Stethoscopes, he wrote, “allow us to physically listen to the sounds of the body.” He cited several clinical scenarios in which the stethoscope “remains essential.”

All that said, I continued to use my stethoscope throughout my entire clinical practice. Of course, my cardiologist friends would have said that listening to bowel sounds is more or less useless, and they would eagerly add, that a surgeon trying to listen to the heart, would be equally useless.

The debate notwithstanding, if you google image the word “doctor” you will find that 48 of the first 50 images that appear, show a doctor with a stethoscope around his or her neck.6 So the instrument endures, will enjoy its 200th birthday, and await the decision regarding its fate in its third century.

If you have any stories about your stethoscope, respond to the blog, or better yet…please drop by the Macklem House, my door is always open.

I remember when I was a…

I remember when I was a medical student one of my preceptors, an eminent, well-respected and very experienced gastroenterologist once quipped about the stethoscope: “throw away that guessing tube and get me some imaging!”

Certainly its fair to say that, at best, listening to bowel sounds is an interpretive art form.

Thanks for the blog, Richard…

Thanks for the blog, Richard. Historical perspective is so important in Medicine. BTW the stethoscope never let me down in determining presence or absence of bowel sounds.

And while auscultating the abdomen, it has helped me, more than once, pick up the turbulent flow pattern of an unsuspected aortic aneurysm. A very faint orbital pulsation once prompted me to listen over the eyeball to make a clinical diagnosis of internal carotid-cavernous sinus fistula and over the occiput in a patient with undiagnosed headaches viz. the murmur of an arterio-venous malformation.(AVM) Oh, how I thanked that “guessing tube”.

It ought to be the finding of reduced breath sounds or a pleuritic rub that initiates the imaging process. Not just ordering a chest x-ray holus-bolus. And while were at it are we going to throw out palpation and percussion along with auscultation? Sometimes I wonder whether even inspection is relevant, recalling a PVD patient sent along for a vascular opinion. Patient told me I was the first to take off his socks to inspect the foot which proved to be an ischaemic diabetic foot in an individual with no Dx of DM to that point.

Don’t you think that the presence of the Littman protruding from the physician’s pocket provides some tangible veracity and authenticity of her/his medical training and is a comfort to the apprehensive patient? Well maybe not, if it stays in the pocket. Draping the scope over the shoulders is, of course, over the top. By the way, Richard, I am glad that you used the stethoscope throughout your clinical practice. More surgeons should be encouraged to do the same.

I say, merci beaucoup a vous, Rene T. H. Laennec. Long live the stethoscope! Where would we be without the A in IPPA?

Gary, a ringing endorsement for the value of clinical skills! Thanks for removing us!

Richard, thanks for reminding us how far we have come and considering where we are and may be going. I hope we have not reached a point where healthcare professionals give a perfunctory listen to our heart, carotids, lungs or bowel sounds in the hospital, clinic or office and then order expensive lab tests/high-tech procedures, sometimes oblivious to the cost or what the follow-ups may expose their patients to as health risks or expense.

From my retired perspective in the US with Canadian relatives who have had no medical mishaps or healthcare billing problems, I hope and expect that Queen’s is continuing to prepare all healthcare undergrad/grad/postgraduates to understand the potential health risks and financial burdens on their patients.from what they order or prescribe, whether their patients understand/want those health risks or can afford the expense.

As we get older, we learn about many classmates, relatives, fiends or others who have faced health/financial challenges. I think all of us should believe that caregivers are compassionate and will do the best they can (medically and financially) for their patients in whatever healthcare system they do or may work.

Bill, you make great points. I continue to be, and always will be, a passionate advocate for healthcare as a right.

I wish I had hung onto my…

I wish I had hung onto my 1950s vintage stethoscope, with the bell-to-diaphragm “switch.” Now most physicians, during those rare times they actually use their Littman-type neckwear, auscultate through the patients clothing! Our physical exam instructor would have suffered a stroke! I fear the fine art of inspection, palpation, percussion and auscultation has gone the way of the mustard plaster…..
Soon, I’ll bet that the patient’s genome will have been sequenced before the stethoscope comes out!
As a gastroenterologist trained in the 1960s, I found abdominal auscultation to be very helpful, BTW.

Thanks so much for your…

Thanks so much for your comment. I’m guessing it will soon be cheaper to sequence the genome than buy a stethoscope!

A few years ago I picked up…

A few years ago I picked up tight mitral stenosis on a patient seen for a non-cardiac condition. The cardiologist was astounded. What would the chances be of an endocrinologist using ultrasound on the heart or knowing what he was seeing? Of course picking up mitral stenosis with a stethoscope used by a current generation physician may be dubious as well. The usefulness of any instrument still depends largely on the skill of the user I guess. Interesting times. Larry M. Wiertz, Meds 68

What a great story, which makes an excellent point.

Richard
Your tribute to Laennec is both welcoming and unusual given its surgeon-Dean derivation. My last year of post graduate training in London was overseen by Aubrey Leatham one the fathers of phonocardiography who designed a stethoscope that we all religiously used.
Learning how to listen- he taught- was related as much to the clinician’s ears, as it was to what was between them! The clinical magic of cardiac auscultation became evident to the prepared mind that used a disciplined systematic approach as is true in so much of medical practice. Outside the heart, the stethoscope can reveal AV fistulas, extracranial vascular stenoses, renal vascular hypertension and as you and others point out abdominal bruits and bowel activity….and then there are its multiple insights into pulmonary pathology.
It seems to me that it is a long way from retirement. In my mind it is a pivotal part of establishing and maintaining the human touch that remains fundamental to the care of the patient. Thanks for reminding us of its redeeming value.
Paul

Thanks for the memories of your fellowship, and the lessons therein learned. It is especially important that our readership hear from you, one of Canada’s most respected cardiologists, on this issue.

Hi Dr. Reznick,
thank you for this post. It is refreshing to see the dean of a medical school share thoughts on the progress and evolution of medicine. As a professional now working at the intersection of medicine and technology, certain topics spark more debate than others: one of these being the role of the stethoscope.

Although I see both sides of the argument, there is definite loss in not recording these sounds. Health data is power in today’s age, and will only continue to become more valuable and important for diagnosis and predictions of health outcomes in the future. As society recognizes this, there are innovations on building upon the current stethoscope such as EKO (https://ekodevices.com/index), a neat attachment that makes this traditional tool a digital hybrid that is able to amplify, record, and store it for later study in a web application.

However I believe there is also hesitancy around disruption in tradition-based models such as healthcare that stems from fear. This may keep us from making significant leaps in the quality of care. So potential viable substitutes such as the smart ultrasound, should be tested for usability without prejudice.

My name is Jeehye Jung and I co-founded AIM (www.aimwithus.com), a social enterprise that aims to accelerate innovation in medicine through interdisciplinary work. I will also be interviewing as an applicant to your school this weekend, March 5th. Seeing the dean be interested in opening the dialogue for an increased role for technology in healthcare makes me a very excited prospective student

Thanks for your contribution to this blog. Your perspective, on the evolution of the use of technology and building on existing platform is a very important consideration.

All my best for your interview this weekend.