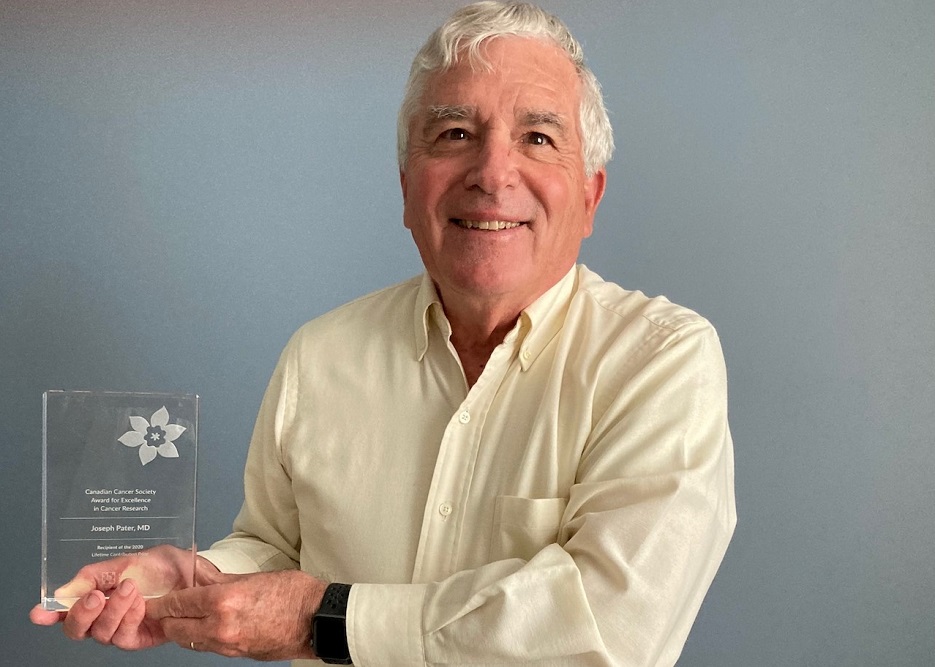 Joseph Pater, founding Director of the Canadian Cancer Trials Group, is recognized for a lifetime of work in cancer research.

For over 45 years, Dr. Pater has been devoted to advancing clinical trial research aimed at improving the lives of cancer patients and to educating, training, and mentoring the next generation of students, fellows, and young investigators. Under his guidance, the Canadian Cancer Trials Group (CCTG) at Queen’s University has become one of the most well-respected cancer clinical trials networks in the world, producing results that have accelerated the development of new treatments and established new standards of care worldwide.

“I am thrilled and humbled to be named the first recipient of the Canadian Cancer Society’s Lifetime Contribution Prize,” says Dr. Pater. “I am pleased that the selection committee has recognized my very collaborative contribution to establishing a network of Canadian research leadership who support the vital endeavour of finding the best treatments to reduce cancer morbidity and mortality, which is CCTG’s ongoing mission.”

Sometimes called the “father” of cancer clinical trials research in Canada, Dr. Pater completed his medical training and accepted appointments in the Department of Medicine and, later, Oncology at Queen’s during a time when medical oncology was still in its infancy. In the early 1970s, Canadian oncologists began running cancer clinical trials with the support of the National Cancer Institute of Canada’s (NCIC) Epidemiology Unit. In 1980, NCIC established a formal collaborative research network, the NCIC Clinical Trials Group (now CCTG) and Dr. Pater was appointed as the inaugural Director. Over the next 27 years, his leadership transformed the CCTG from a small national program at Queen’s to the largest collaborative cancer clinical trials network in Canada. The team became the first Canadian research network with a developmental drug program, allowing them to lead new investigational drug trials that directly led to new cancer drug approvals worldwide.

Dr. Pater has played an active role in the development, execution, and analysis of over 500 multi-centre Canadian and international cancer trials involving more than 85,000 patients around the world. His 240 publications span the areas of hematology, oncology, statistical methods, cost effectiveness, and quality of life, and have been cited over 24,000 times for their insights on new drug and therapy development and patient-centered outcome measures.

“Dr. Pater created the most impactful cancer clinical research program in Canada, in terms of generating research results that directly led to benefits for patients with cancer,” says Janet Dancey, CCTG Director. “He is one of the most important individuals in Canadian cancer research, having built a collaborative network that has defined new standards of practice, improved patient outcomes, and that is recognized globally as a centre for excellence."

As a Queen’s professor and mentor, Dr. Pater also acted as head of the Department of Community Health and Epidemiology, taught clinical trials courses to dozens of cohorts of students, and supervised

numerous graduate students and fellows, many of whom have become emerging leaders in their own right.

After retiring from the CCTG, Dr. Pater served a three-year term as Vice-President of Clinical and Translational Research at Cancer Care Ontario, during which time he helped develop a new research chairs program and facilitated planning for provincial investments in cancer research. He has sat on numerous research advisory boards and selection committees in Ontario, Canada, and around the globe.

For his countless accomplishments, Dr. Pater has received multiple awards and accolades, including the Canadian Cancer Society’s Award of Excellence in Medicine and Health (2001), National Cancer Institute of Canada’s Diamond Jubilee Award (2007) and the Canadian Cancer Research Alliance’s Award for Outstanding Achievements in Cancer Research (2015).

“We’re pleased to introduce the Lifetime Contribution Prize this year, which provide an opportunity to honour extraordinary Canadian researchers in a new way,” says Stuart Edmonds, Executive Vice-President, Research & Advocacy, Canadian Cancer Society. “The work of Dr Pater has had, and will continue to have, a tremendous impact on cancer research in Canada and on the lives of people affected by cancer.”