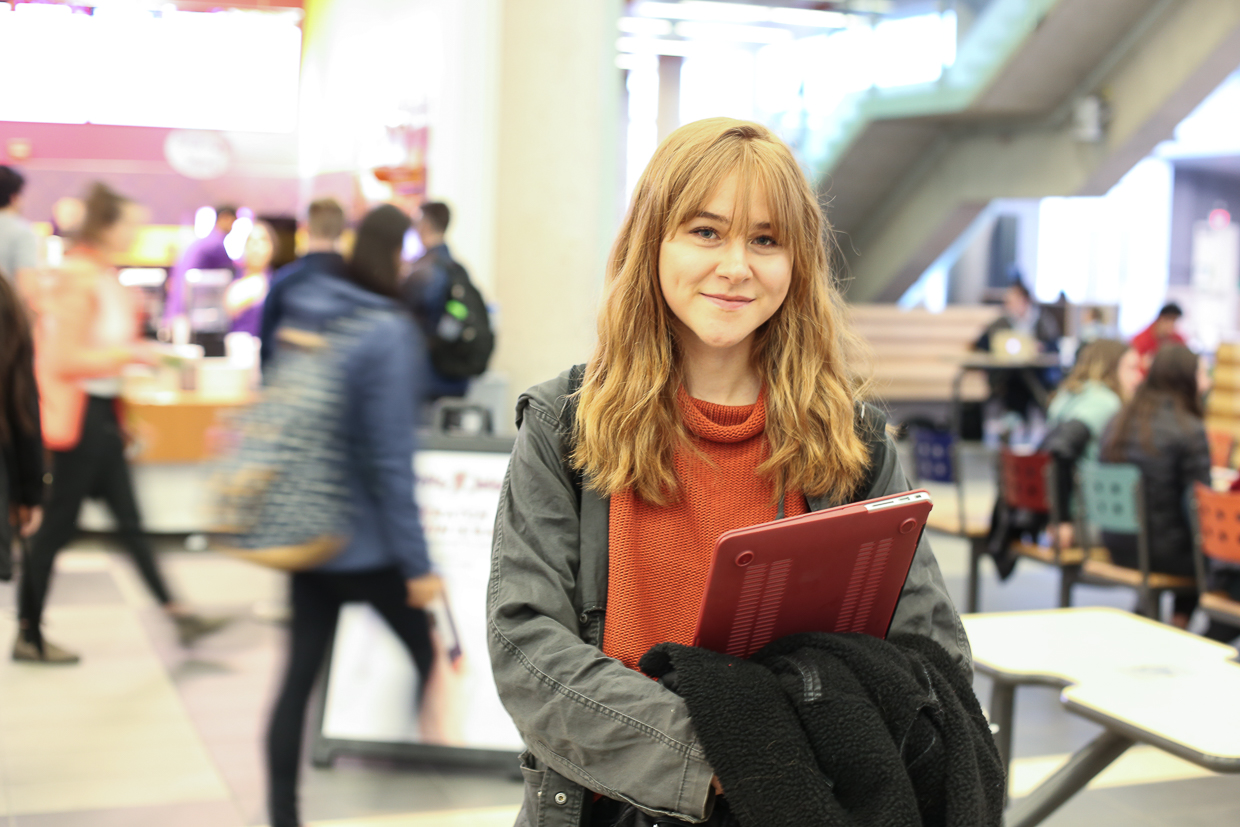 On-campus and online: this student's unique journey in the Bachelor of Health Sciences program

Allison Nerbas grew up in Aurora, Ontario and moved to Kingston to attend Queen’s after high school, but she never sets foot in a classroom.

This isn't because she is a poor student, but because she ended up deciding that the course that was truly right for her at Queen’s was the online Bachelor of Health Sciences (BHSc) program.

When Allison was originally trying to decide which universities to apply to, she hadn’t given much thought to health sciences, so she did not think to apply to the BHSc at Queen’s. As she started her first semester, though, she took elective courses in pharmacology and anatomy and realized that she wanted to pursue that line of study. After doing some investigating, Allison figured out that the BHSc program would give her the best opportunity to take the courses she really loved.

Allison talked over the decision with her parents, and they encouraged her to make the choice that felt best for her. With her family’s support behind her, she started the process of transferring to the BHSc program. She would change from being an on-campus student to an online student.

After she’d made that transition, Allison had the option of moving away from Kingston. Since she now had all the flexibility that comes with being an online student, she didn’t need to worry about living in proximity to her classes.

But Allison ultimately decided that she wanted to stay in town. Over the course of her first year, she’d come to truly love both the campus and culture of Queen’s. She had found social groups that she felt connected to in both her residence hall and her clubs. Even if the courses she wanted to take most were online, she wasn’t willing to give up every aspect of the campus experience.

So Allison is now in the unique situation of being an online student with a foot in campus life. She lives in an apartment in Kingston with other Queen’s students, and she does a lot of her studying in the Stauffer library.

Just having finished her second year of the BHSc program, Allison still feels confident in her decision, mainly because she continues to enjoy her coursework. While she hasn’t taken any classes in the program that she didn’t like, a couple have stood out as favourites. For instance, she says she has particularly enjoyed the ways in which the course “Social and Physical Determinants of Health and Disease” opened her eyes to the wide range of factors beyond biology that influence a person’s wellbeing. And she also found “Interprofessional Approaches in Health Care” fascinating for the insights it provided into the communication and team work that goes into patient-centred care.

These classes also point to what she appreciates most about the BHSc: the way it mixes basic science courses with classes that are oriented more toward the social sciences. Allison believes that this diverse range of classes is giving her a truly holistic understanding of the health sciences.

Allison is also so enthusiastic about the BHSc program because she feels like her professors really make an effort to help her and her online classmates as much as possible. Even though she doesn’t interact with her instructors in person, she says they always respond efficiently to her emails and leave helpful comments on her posts to the course discussion boards.

This fall, the Faculty of Health Sciences will be launching an on-campus version of the BHSc program, and Allison is planning on being a resource for this incoming group of students. She has already volunteered to be an orientation leader, which means she will soon be hard at work figuring out what the first-ever on-campus BHSc orientation will look like. At Queen’s, there are so many orientation rituals in many of our different programs, and our students seem to love the ways in which these connect them to the history of the university. Allison is drawn to that aspect of Queen’s, but also says “it’s cool to be a part of making the traditions.”

Looking to the future, Allison isn’t positive yet what specific career path she plans to go down after she earns her BHSc. But, rightly, she doesn’t let this stress her out too much. “I know I love what I’m learning,” she says, “and right now that’s the main thing.”

It’s so great that we have keen students like Allison in our online BHSc program, and I know she’ll make a great mentor to our first on-campus students in the fall. Do you have any thoughts about online education or undergraduate health sciences programs? If so, please share them in the comments below. Or better yet, please stop by the Macklem House: my door is always open.

I take the online BHSc also,…

I take the online BHSc also, and LOVE it. Everything in this article resonates exactly with how I feel! This program is well-rounded for any health-related profession. Understanding social contexts and circumstances mixed with with biological factors will help me become a compassionate paramedic.

Thanks for your comment, Amber. And I'm so glad to hear that you are loving the BHSc program. Everyone involved in that program has done a tremendous job making it as strong as it can be, and it's nice to hear that their hard work is paying off. I have no doubt that the BHSc will prove very valuable in your career as a paramedic.

Richard, I read and…

Richard, I read and appreciate all your On-campus and online posts. This one emphasizes how young students are evolving in their learning preferences. Progress and change are good, and I'm glad Queen's is leading the way in trying to meet their needs. Hopefully online learning won't dilute the rich Queen's tradition of direct, personal mentorship that served my father and me so well.

As BHSc students graduate, it will be interesting to see what they choose for careers or additional professional education/training. I have no doubt that there will be many continuing opportunities for rewarding careers in health sciences and medical service.

All the best to Allison and those like her who may contribute to Queen's-inspired, compassionate healthcare.

Thank you for your comment, Bill. I am also eager to see what paths our BHSc students take after Queen's. I have no doubt that many of them will have inspiring careers in the health sciences or whatever profession they ultimately choose to pursue.

One of the most valuable…

One of the most valuable aspects about online learning is that it opens it up to people who can't immerse themselves full time! I've always aspired to getting a degree, and after 14 years in my (college educated) profession I'm finally making it a reality. It will take me a little longer, but I am making my dream come true while maintaining my current career. I've taken online courses at several universities and I have to say the Queens online class format is one of my favourites.

Thank you so much for your comment, Shawna. I love the fact that online programs make education so much more accessible to people who are not able to be full-time students. And I'm glad to hear that you think Queen's is doing a good job with the way it provides these classes. I wish you the best of luck as you work towards your degree and your dream!

i am currently working as a…

i am currently working as a psw and want to further my education. i need to work full time in order to pay for school. queens is the ideal fit for me..hopefully i can get in!