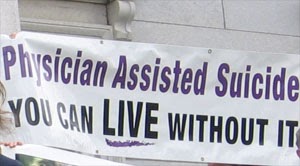 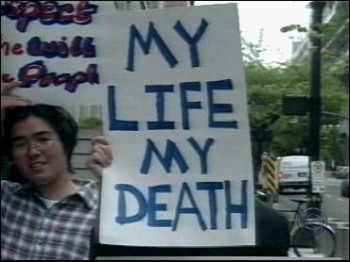 In June the Canadian Medical Association released its preliminary findings on the issue of physician assisted dying.1 The report calls for “creation of a national palliative-care strategy to ensure people across the country have access to a high-quality, dignified end-of-life experience.”2 Recently the Province of Québec passed Bill 52 that affords Québec citizens the right to “die with dignity”. The bill passed in the Québec assembly in June by a vote of 94 to 22.3

As such, the national debate is heating up, and a case, Carter v. Canada, will soon be heard in front of the Supreme Court and will likely be seminal in the development of national law and policy.

The case was appealed in the BC court and the original ruling was overturned. An appeal was the made to the Supreme Court of Canada and the case will hear arguments starting in October of this year.

It is of note that the CMA has applied for intervener status in the Carter case and Dr. Chris Simpson from Queen’s, as incoming CMA president, will be the appellant. He will likely be making an appearance at the Supreme Court this Fall (as a “friend of the court”) to share the CMA’s national town hall experience on this issue.

As one can imagine, the country is polarized on this issue. Even physicians are divided on this issue. “A recent poll Canadian doctors conducted earlier this year (2013) found that 38 per cent think euthanasia should be illegal, 34 per cent think it should be legal, and 28 per cent were unsure or would not say.5 Regardless of one’s opinion, it is also clear that in Canada, we still lack global access to excellent palliative care for the terminally ill. What is more, we have a very narrow construct of “terminally ill” and are only recently starting to embrace that terminally ill means more than dying of cancer, and must acknowledge that many other patients are in need of help with suffering, from illnesses such as neurodegenerative disorders, chronic lung disease, chronic heart disease and others.

This is an important topic for Canadians and indeed, an issue in which health care providers should take a lead in helping shape national policies. It is my personal hope that we are quickly arriving at a national consensus on this issue.

If you have any thoughts on the matter of physician assisted dying, please comment on the blog, or better yet…please drop by the Macklem House, my door is always open.

Thanks Alice. I agree, this…

Thanks Alice. I agree, this is an issue of national importance.

As a palliative physician,…

As a palliative physician, this area is obviously very important to me. The Canadian Society of Palliative Care Physicians has a recent policy statement on Bill 52 (http://www.cspcp.ca/cspcp-statement-on-bill-52/), against euthanasia and physician-assisted suicide, although the policy is nowhere near unanimous in our specialty. There was a lively debate and discussion at the palliative care rounds several months ago on this very topic, with strong opinions on either side.

I think most of us expect that physician-assisted dying/suicide (or euthanasia) will become legal across Canada. It would be a terrible shame for people to not understand the full scope and ability of palliative care to relieve symptoms and distress (physical/psychological/spiritual) and to try and provide the best quality of life possible until someone dies. It is poorly understood by the public and even other health care professionals.

We need to emphasize palliative care, normalize it, build capacity for it (both speciality training and training for all physicians), and ensure access to all Canadians. We are not doing a perfect job and healthcare focus (and spending) are not aligned well to provide excellent palliative care, particularly to the non-cancer patients. When that is done, and people know what is possible (and not possible) from palliative care, we are in a better position to fully evaluate physician-assisted dying from a personal, medical, and societal perspective.

Craig, I think your comments…

Craig, I think your comments are very important and add an important dimension to the discussion. You are 100% right about the lack of access to palliative care medicine, especially for patients with non-malignant conditions. Thanks for bringing this important perspective to the blog.

You should read up on the…

You should read up on the swiss process.

Thanks for your comments…

Thanks for your comments.Will do the reading.

I am from Vancouver and I’m…

I am from Vancouver and I’m pleased with the supreme court decision on Dying with Dignity.It is about time that people in Canada can make a decision whether they wants to live with pain and having no control over their body.This is a human rights case.This is not the 19th century when people had to put up with pain and suffering for years before they died.Now people can live like humans not like animals.