Indigenous and LGBTQIA2S+ flags raised in School of Medicine building 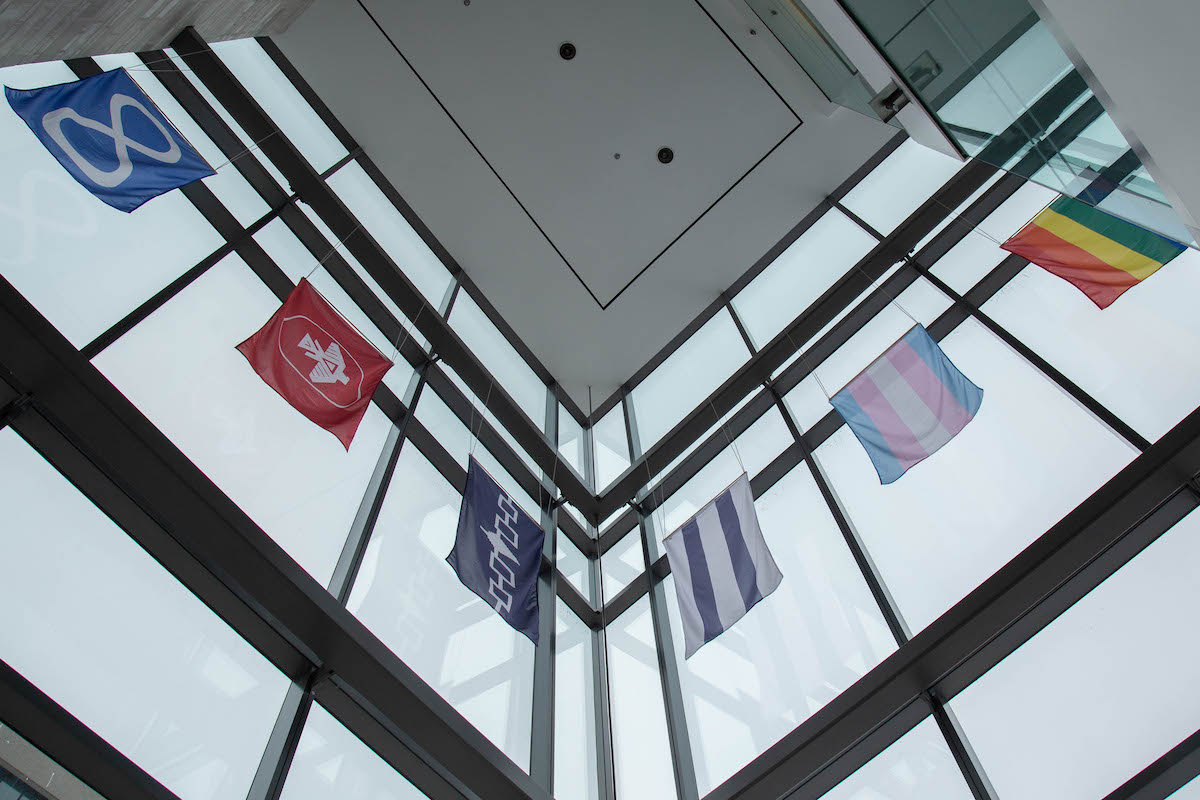 Indigenous and LGBTQIA2S+ flags raised in School of Medicine building

These six flags were put up in several buildings across campus as part of a campus-wide initiative. They are in response to a series of hate crimes that took place on campus within  the past few years. The first occurred in October 2019, and saw a racist and homophobic poster left in a residence common room, on the “safe space” floor dedicated to Indigenous and Queer Learners and Allies. The second, occurred in June of 2020, when the flags outside the Four Directions Indigenous Students Centre were stolen. After the Centre and Indigenous Staff on campus rallied to rehang the flags, they were once again vandalized and damaged. Another incident that occurred within the same year involved a 5ft slash carved into the skirt that protects the ceremonial tipi, at the Four Directions Indigenous Student Centre. Queen’s campus Elders have come together in unity to repair the skirt of the tipi to restore the space for Indigenous students and allies.  The initiative also grows out of Queen’s University’s Extending the Rafters: Truth and Reconciliation Commission Task Force Report, released from the Office of Indigenous Initiatives, which strives to enhance the visibility of, and strengthen relationships with, Indigenous communities working, studying and supporting  Queen’s.

Accompanying the flags in the School of Medicine building is a poster which acknowledges that Queen’s University is situated on traditional Anishinaabe and Haudenosaunee Territory. The poster also provides readers with a description of each of the six flags.

Métis Flag – The Métis Nation are of mixed Indigenous and European descent, carrying a unique culture, history, and language. This is exemplified in their customs and way of life, which pull from both Indigenous and European lineages, but are also separate from either heritage, forming their own traditions. Métis communities were prevalent around the Great Lakes, many of Ontario’s waterways and in the northern portion of the province. In 1982 when the Canadian constitution was repatriated, First Nations, Inuit, and Métis were recognized as Indigenous Peoples with rights under Canadian law. The Métis Infinity Flag, which has two variations — red or blue — features a white infinity symbol at the centre and dates to 1815. The infinity symbol represents: a.) the joining of two cultures, and b.) the existence of a people forever.

Anishinaabe First Nations People – The Anishinaabe First Nations is comprised of the Ojibwe, Potawatomi, Odawa (Ottawa), Chippewa, Mississauga, Saulteaux, Nipissing, and Algonquin people. Anishinaabe, which means Original People or Good People, lived as far west as Saskatchewan, Manitoba, Minnesota, Michigan and the Great Lakes, throughout north Ontario, up the St. Lawrence River and into Quebec City. The Anishinaabe First Nations flag features a thunderbird (Animikii) at the centre. According to traditional stories, this powerful, spiritual animal is said to create the sound of thunder just by the flapping of its wings. The bird is also a protector with the ability to bring rain that nurtures and cleanses the earth.

Six Nations Confederacy – This alliance originally featured the Seneca, Cayuga, Onondaga, Oneida, and Mohawk nations, later adding the Tuscarora in the early 1700s. The initial accord, which took place in A.D. 1200 under what is known as the “Great Tree of Peace,” brought peace amongst the nations. Collectively, the confederation’s people are known as the Haudenosaunee, which means "The People of the Longhouse." The Longhouse symbolizes the expanse of land, stretching throughout New York State. To memorialize the confederacy, a wampum belt known as the Hiawatha Belt, was created. Made up of purple shells, the belt represents each of the original five nations and is read from right to left. The first symbol represents the Mohawk, followed by a symbol representing the Oneida. At the centre is the Great Tree of Peace, which represents the Onondaga. To the immediate left of the tree is the symbol for the Cayuga, followed by the Seneca. Each symbol is connected, representing the union of the nations.

Two Row Wampum – When members of the Mohawk Nation noticed unannounced, new settlers clearing Mohawk land along the Hudson River, near present-day Albany, on which to build homes with their families, they sent a delegation. At the heart of that meeting in 1613 was to set guidelines on how the Haudenosaunee and Dutch would treat each other. It was agreed the two groups would treat each other as brothers and form a relationship built on friendship, peace, and a relationship that would last forever. From that, a belt was designed to symbolize this new venture. The Two Row Wampum belt, also known as the Kahswentha, is made of white wampum shells featuring two purple lines, each representing individual vessels (a canoe and a ship). The canoe represented the Haudenosaunee way of life, while the ship represented the Dutch way of life. Each individual vessel, made up of its own cultures and traditions, travel side by side on the river of life in peace and friendship on Turtle Island (North America).

Wampum belts have a fond significance to Queen’s University. During a March 7, 2017 ceremony, the Clan Mothers at Tyendinaga and the Grandmothers’ Council in Kingston presented the friendship wampum belt to the Queen’s University Senate. This precious symbol of friendship and peace is present at all Senate meetings.

Transgender Pride Flag – Created in 1999 by Monica Helms, a trans woman, the Transgender Pride Flag features just three colours presented in five, horizontal stripes. The top and bottom bands are light blue, the traditional colour for baby boys. Two inner stripes are pink to represent girls and the centre colour is white, symbolizing those who are either transitioning, gender neutral or don’t identify with either gender. This flag was first flown in Phoenix, Arizona during a Pride Parade.