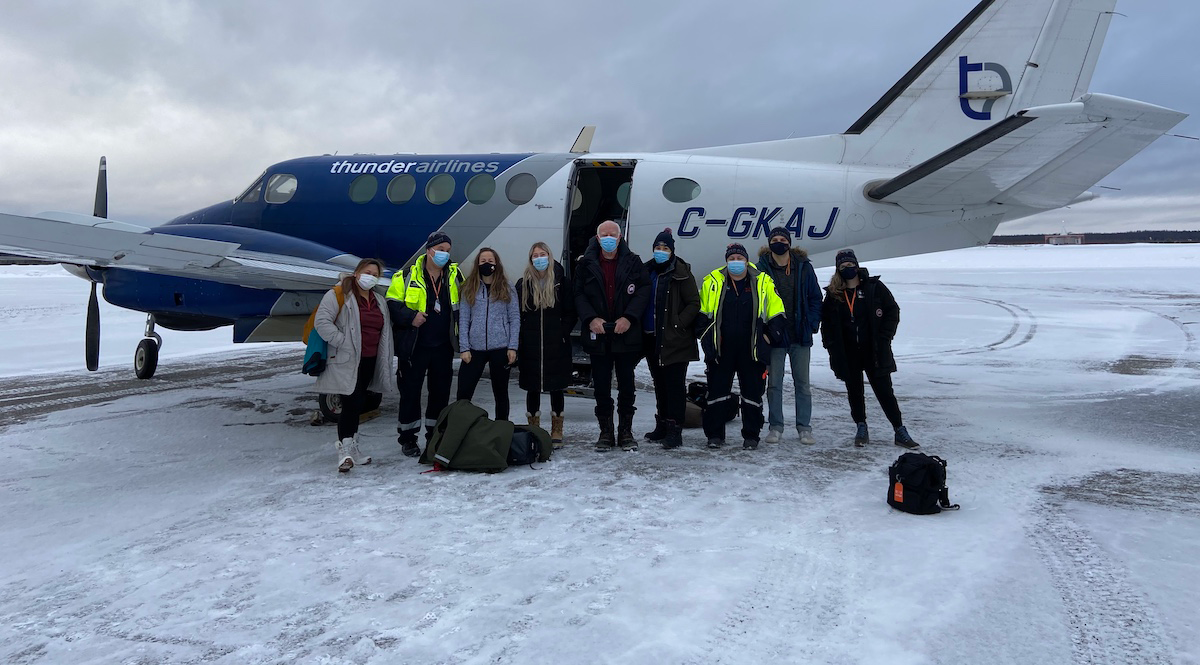 Fourth-year nursing student Shalisa Barton was transformed by the experience of participating with Operation Remote Immunity (ORI). Shalisa is an Indigenous woman who has been interested in incorporating more humanity into her role as a nurse. ORI was the perfect opportunity to explore that concept. It is a public health initiative created by the Government of Ontario to administer COVID-19 vaccines in remote fly-in communities in northern Ontario.

“I went into nursing because I wanted to work with people and support them through these very vulnerable moments in their lives. Even on my very first clinical placement, I found myself starting to get task-oriented,” says Shalisa. “I loved my experience with these remote communities because healthcare there is very person-centric. We didn’t have slotted appointments, nor was there a set amount of time that you had to spend with each patient. This allowed us to develop very therapeutic relationships with the individuals coming into the clinic. We talked through their concerns, talked about their lives and their families, and made sure that they knew we were there to support them regardless of whether or not they decided to get the vaccine.”

Led by ORNGE, a Canadian non-profit air ambulance service, ORI began in early February and supported 31 communities from the James Bay Coast all the way to the border of Manitoba. Queen’s University was one of three post-secondary institutions involved in the initiative, sending four teams made up of healthcare professionals and learners to administer vaccines.

The teams of Queen’s participants were each composed of a medical student, a nursing student, a resident, and a faculty physician. Each team spent two weeks living in northern Ontario, flying daily into communities such Attawapiskat, Fort Albany and Moose Factory, and administering vaccinations. The Nishnawbe Aski Nation (NAN) co-developed the initiative to ensure the engagement of Indigenous leadership, and the Weeneebayko Area Health Authority (WAHA), along with other local health authorities and community leaders played a crucial role in ensuring that there was knowledge of and community support for ORI before the initiative began. With the help of everyone involved these communities now boast some of the highest vaccination rates in the province.

In addition to its impact on remote communities in northern Ontario, ORI also acted as a transformative educational experience for the learners who were involved. The initiative offered interdisciplinary teams of health professions learners the opportunity to practice in an environment that is vastly different from the one they are used to. For some of these learners, their experiences with ORI have not only shaped the way that they think about healthcare but have even encouraged them to pursue careers in rural settings.

Third-year medical student Dawn Armstrong likewise took part in the project. Also an Indigenous woman herself, Dawn has known since the start of her time at Queen’s that she wanted to focus her career on Indigenous healthcare. Grateful to be given this opportunity, Dawn made an effort to get to know these communities as best she could while she was there, and this experience has pushed her to consider practicing in a remote community after she completes her residency.

“When we arrived in these communities we were met with open arms,” says Dawn, “and when I mentioned to one individual that I may be interested in working in remote communities in the future, she offered to spend my lunch break taking me around town. She took me to her house and showed me the challenges they face with insulation, she took me to the grocery store so I could see how expensive the food was, and she told me about the barriers to medical care. Beyond these challenges she also showed me the amazing community of support that exists there. It really made me want to work there and support the community in whatever way I could.”

Both Dawn and Shalisa found the interdisciplinary approach to the project to be rewarding. “I hadn’t had the experience of working on an interdisciplinary team like this before,” says Dawn. “Working alongside paramedics, nurses, residents, and faculty members we had the time to share stories, learn about each other’s roles and understand how we can best support each other. I have gained a whole new understanding and appreciation for my colleagues; that’s something I hope to carry with me moving forward.”

For Shalisa, her experience with ORI has helped to make her dream of a career in Indigenous healthcare a reality; she recently secured a position with Weeneebayko General Hospital in Moose Factory and will begin practicing as a nurse following her graduation this spring. It seems the benefits of this service-learning experience will be far-reaching indeed.

Reflections from learners who participated in Operation Remote Immunity