Queen’s researcher shooting for ‘cancer groundshot’: concept is changing the way we view the battle against cancer 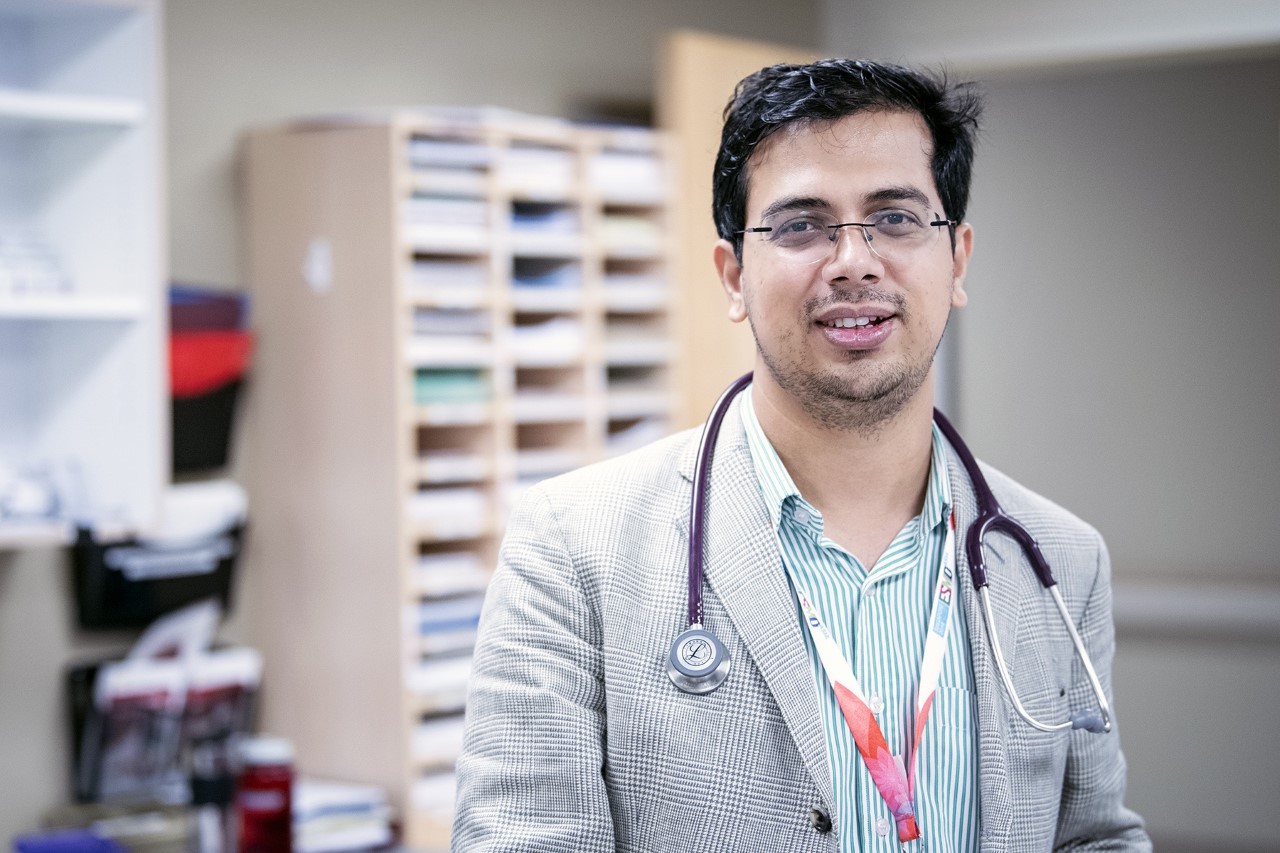 Queen’s researcher shooting for ‘cancer groundshot’: concept is changing the way we view the battle against cancer

Dr. Bishal Gyawali had no idea his “cancer groundshot” would be heard around the world.

The term he coined six years ago in an obscure blog post will have its own showcase in June at the annual meeting of the American Society of Clinical Oncology (ASCO), the world’s largest organization for people devoted to the study and treatment of cancer.

“Cancer Groundshot: Addressing the Global and National Inequities in Cancer Care” will be chaired by Dr. Gyawali, associate professor in the Department of Oncology at Queen’s University.

It all started in 2016 when then-U.S. Vice-President Joe Biden announced the hugely ambitious $1.8 billion Beau Biden Cancer Moonshot Initiative. The five-year program focused on such areas as immunotherapy, genomics, artificial intelligence, and other cutting-edge techniques that could be brought to bear in the continuing effort to cure cancer. Dr. Gyawali, a self-described “prolific user” of social media, was quick to respond in his blog to a program he welcomed but which he thought ignored the reality of access to cancer treatment – especially in the developing world, “where people are dying because they don’t have access to surgery, basic radiotherapy, and pathology services.”

Dr. Gyawali in no way opposed the cancer moonshot program. He objected, however, to putting 90 per cent of resources into the exploration of new techniques and treatments and just 10 per cent into increasing access to proven, cost-effective therapies. “I wrote that what was also needed was a well-funded ‘cancer groundshot’ that focused on actionable, high-value ideas applicable all over the world. By focusing on this,” he says, “significant success could be achieved globally. We all want to save lives the best way we can. Let’s focus on this and make good things happen.”

Colleagues responded favorably to his post. In 2017, he was invited to speak about cancer groundshot at a meeting of the Royal Society of Medicine in London focused on global cancer control and challenges – and he continued to use the term when speaking at other international oncology gatherings. Dr. Gyawali and Queen’s researcher Dr. Christopher Booth, a mentor and fellow medical oncologist, collaborated on a cancer groundshot article for the prestigious journal Lancet Oncology in 2018.

Dr. Gyawali also backs his words with action. His own research is very much tied to the concept, including his latest article with Dr. Booth, “Cancer treatments should benefit patients: a common sense revolution in oncology,” published April 19 in Nature Medicine.

Dr. Gyawali has a broad range of research interests, including global oncology, health services research, regulatory policy, value-based care, and the financial toxicities and disparities in cancer care. He is the author or co-author of over 100 peer-reviewed publications. His 2022 work includes a Nature Reviews paper on why recent lung cancer immunotherapy trials are unethical (with Queen’s Medical Oncology Fellow Dr. Adi Kartolo).

It's been a rapid rise for Dr. Gyawali, who was born and received his medical training in Nepal and took his oncology training in Japan. After returning to Nepal to undertake clinical work, he went to Harvard to do a research fellowship and then came to Queen’s in 2019 as a clinical fellow. He was appointed as associate professor in June 2021 and says he has received tremendous support from the university.

Much of his work today is based on his early service as a physician. He recalls sitting with members of his extended family who had received cancer diagnoses. He learned first-hand the worries people undergo establishing priorities regarding the kind and cost of care, how to endure it, and how to pay for it. “When I became an oncologist, I remembered these experiences. It made me want to focus on how my work as a clinician and a researcher could make patients with cancer a more informed participant in their care and have a better life – rather than a recipient of a process someone else had decided for them. They should have a voice at the table.”

To advocate on behalf of patients sometimes requires a highly critical voice – one Dr. Gyawali has not been shy to provide. He has written against the introduction of new drugs that might shrink a tumour slightly but fail to provide the patient with a better or longer life. He is critical of the ‘financial toxicity’ of contemporary treatments to patients, their families and national health care systems, and laments that existing and proven programs and therapies are sometimes forgotten in the excitement about the next new, highly touted drug.

“I knew from working on the ground as a clinician in my country that if you are thinking about solving the problem of global cancer, you need to consider the reasons people are falling victim to the disease,” Dr. Gyawali says. “People in Nepal and Africa, for instance, are not dying because they lack access to advanced treatments.”

Dr. Gyawali says his life’s work has been centered around the journey of a patient with cancer from diagnosis to being a survivor – how to help the process, how to make it better, and how to keep the patient informed along the way. He looks forward to discussing these priorities and their connection to cancer groundshot in Chicago in June. The ASCO conference is expected to draw as many as 50,000 participants, and he believes it will be an opportunity to open avenues to wider awareness and positive change in his field.

“My hope is that we can convince the policy makers and politicians to enact some change,” he says. "That would be real success: to help them understand that you can save more lives with smoking cessation campaigns, for instance, than with some of the new drugs that we have. We know so many things that actually work in cancer control, but we have forgotten how to prioritize and implement them. I think cancer groundshot can act as a reminder and make a difference.”