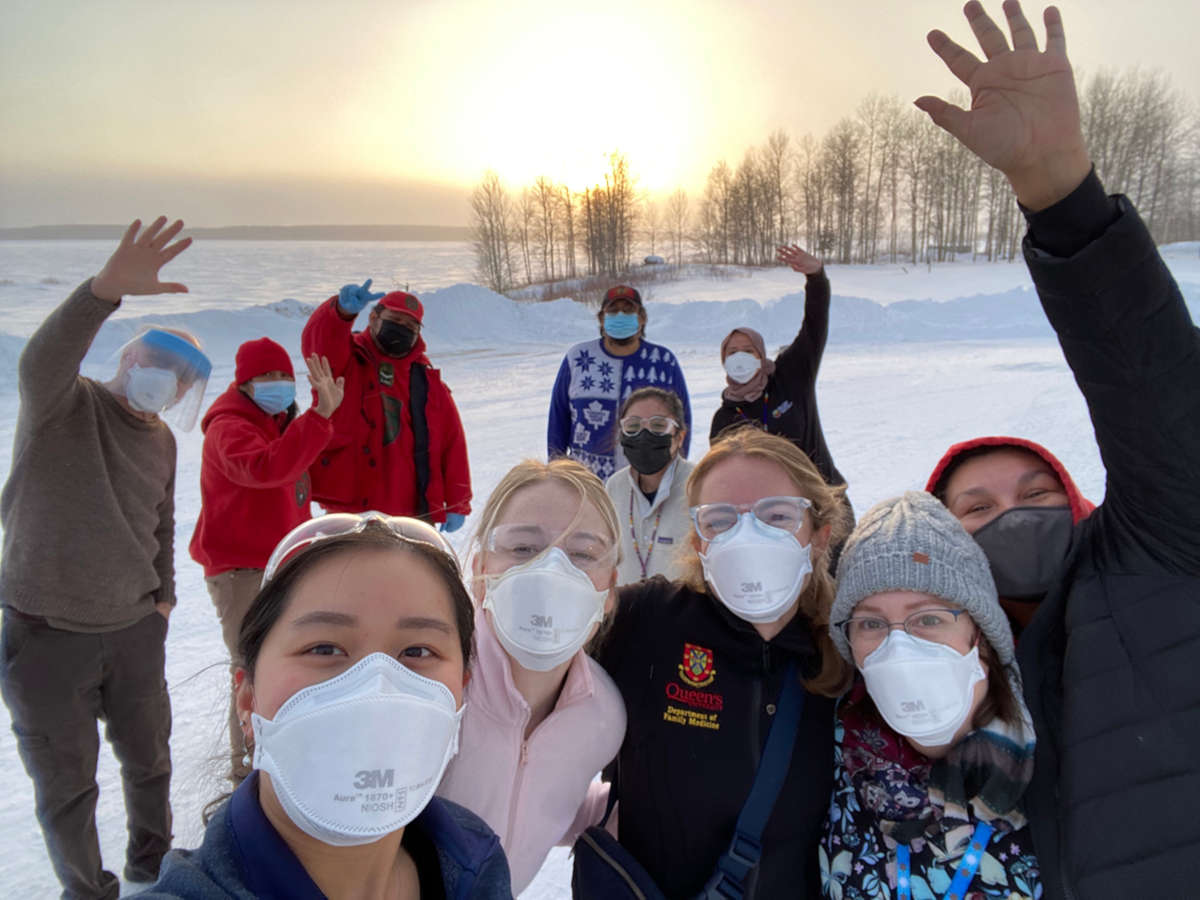 As a physician and associate professor of medicine, Dr. David Taylor is accustomed to giving lessons. But on a recent trip to Bearskin Lake First Nation with a group from Queen’s to help administer COVID-19 vaccines, Dr. Taylor was the student, watching and learning from a pediatrics resident giving a vaccine to a screaming child.

Dr. Taylor says that on those trips to fly-in Northern Ontario communities, organized by Indigenous Services Canada as part of its Operation Remote Immunity program, there were no hierarchies between faculty physicians, medical and nursing students, and residents.

“It really didn’t matter what your credentials were,” Dr. Taylor says. “If you had the skill to deliver a vaccine, you did that. It didn’t really matter if you were an associate professor or you were a fourth-year nursing student.”

That sense of camaraderie and teamwork didn’t happen by accident. It’s part of a bold new plan within Queen’s Health Sciences to dramatically increase interdisciplinary collaboration to ensure students, regardless of their field of study, understand each other’s roles and how to work together before they enter the workforce. By 2026, the goal is for 20 per cent of the health sciences curriculum to be interdisciplinary, which would make the university a leader in this area in Canada.

Practically speaking, an increased focus on interdisciplinary collaboration means students studying medicine, nursing, and rehabilitation therapy will find themselves sitting next to each other in class more often. And when there are opportunities for placements or field work, such as involvement in Operation Remote Immunity, more health sciences students will work together – a departure from longstanding practice.

“It really didn’t matter what your credentials were, if you had the skill to deliver a vaccine, you did that. It didn’t really matter if you were an associate professor or you were a fourth-year nursing student.”

Dr. Jane Philpott, Dean of Queen’s Health Sciences, says this new mission isn’t a tokenistic attempt to build bridges. It’s a mission to break down traditional hierarchies in medicine, ensuring everyone understands the value and skill others bring. In many ways, Dr. Philpott says, the realities of COVID-19 have helped usher in this change by exposing vulnerabilities in the health-care system.

“The pandemic really set that in motion in a way that helped us to say, ‘This is what we need to do, this is the potentially revolutionary breakthrough of how you could build a better health-care provider,’” says Dr. Philpott, who is also director of the School of Medicine. “It’s really getting that message across from Day 1, that every part of the system has value and, as we’ve learned in the pandemic, we can’t function without every part of the system.”

Involvement in Operation Remote Immunity, which was launched in February 2021 by the Ontario government, cemented in Dr. Philpott’s mind the importance of bringing health sciences students together as teams.

Under the program, which was taken over by Indigenous Services Canada in November 2021, Queen’s students, medical residents, and a faculty physician travel as a team to small, remote Indigenous communities in Northern Ontario to administer COVID-19 vaccines to adults and children. The groups stay in Thunder Bay, often for a week at a time, and fly out each morning to a different community, returning late in the evening only to do it all again the next day.

“We saw the power of what it could do with our students,” Dr. Philpott says, recalling the stories she heard about students and residents having a chance to interact in an informal setting.

Sarah Running, who is in her final year of nursing school, says that before taking part in Operation Remote Immunity, she rarely spoke with doctors, even when doing placements at hospitals, and says that distance may lead some nurses to feel intimidated. But during her time up north, she had a chance to connect with a Queen’s medical resident and a family physician, which gave her a fresh perspective.

“We had a lot of downtime, flying into the communities, just chatting informally with the doctors. It was really quite nice,” Ms. Running says.

She was able to tell the resident and physician on her team what it’s like to be in nursing right now, with shortages and other pressures building due to the pandemic.

Dr. Erna Snelgrove-Clarke, Vice-Dean (Health Sciences) and Director of the School of Nursing, says that when she began her career, nurses had to stand up when doctors entered the room. While times have changed and attitudes are shifting, the hope is that increasing opportunities for collaboration across disciplines will lead to better outcomes for patients – and the profession.

“We need to know more about each other in order to work together effectively,” says Dr. Snelgrove-Clarke.

For Justine Fletcher, a first-year family medicine resident, participating in Operation Remote Immunity with a group from Queen’s Health Sciences was a “life-changing” experience that enabled her to gain a new appreciation for the knowledge and experience brought by others on the team.

“We were all coming from different places, different areas of work, and bringing unique skill sets together to achieve common goals,” she says. “You gain a new appreciation for what people in each area are doing and what they’re bringing to the table.”

Dr. Fletcher recalls how the faculty physician who was part of her team brought extensive clinical experience and knowledge from which the entire group could learn. But when he was struggling to input some information on an iPad, it was the younger team members who stepped in to help.

Dr. Fletcher, who is Indigenous and from the Hiawatha First Nation, a short drive from Peterborough, Ont., says the experience reinforced the importance of working with underserved communities. Later this year, she will be spending part of her residency in Sioux Lookout, a remote northern community with a large Indigenous population.

Kelsey Mongrain, a first-year resident who also participated in Operation Remote Immunity, says she’s seen first-hand how a top-down medical culture that overemphasizes the role of doctors can damage the health-care team. Before medical school, she studied to become a dietitian in college and had the opportunity to work in a hospital, where she saw a clear hierarchy that damaged morale.

“Going into medicine with that kind of experience gave me a completely different view of interdisciplinary work and how every member can give a unique contribution,” she says.

Now, as a resident, Dr. Mongrain says she sees major value in the push by Queen’s Health Sciences to increase interdisciplinary collaboration.

Dr. Mongrain, who is part of the Kebaowek First Nation in Quebec, a small community with unreliable access to the health-care system, plans to practise rural family medicine. She says Operation Remote Immunity gave her a chance to see how other communities live and that it was a highlight to see how seniors, as well as children, continue to speak traditional Indigenous languages.

“I think where it will change the most is in attitudes and aspirations,” she says. “It will break down misunderstandings. It will build respect. I think it will also just give students the freedom to imagine the possibilities.”