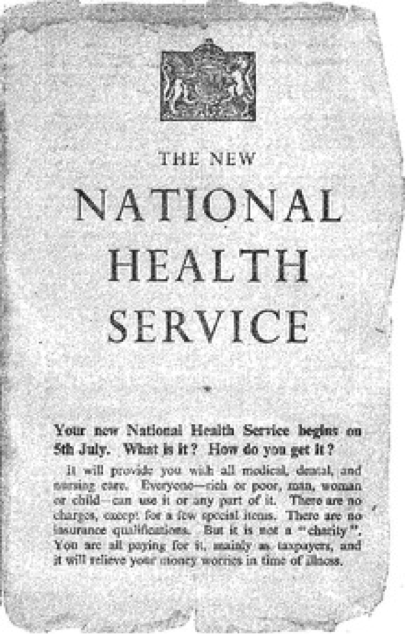 Our fantastic experience with the NHS

My son Gabriel is currently studying law at Queen Mary University of London. Fourteen days ago he developed a severe sore throat, and after a few days of cold medication and lozenges, he was getting no better. With advice from Cheryl and me, Gabe went to the student health clinic where he was seen by a family physician. She diagnosed tonsillitis, started him on Penicillin, and requested that he return to the clinic in two days to follow up on his condition. When he was seen two days later, the physician, who was incredibly caring and attentive, felt that he had not improved and sent Gabe for an emergency ENT consultation at the hospital.

He was admitted that day to The Royal London Hospital, a leading, internationally renowned teaching hospital based in east London, part of Barts Health NHS Trust.

Gabe received amazing care at the NHS funded hospital. He was quite sick; his peritonsillar area was so inflamed and swollen that he could barely talk or swallow. In a very short time he was seen by an emergency room physician and was admitted with a diagnosis of severe tonsillitis. He was started on an IV, received broad-spectrum antibiotics, had a CT scan, and had consultation with the otolaryngology service.

The nurses, the physicians and the technologists treated Gabe, who at the time was alone in England, with compassion and great care. He was well looked after for five days, and then he was discharged. Three days after discharge, and already greatly improved, he had a follow up visit with the ENT consultant, had an “on the spot” ultrasound and an aspiration cytology, and was prescribed ongoing treatment.

I am thankful for the amazing treatment Gabe received from the NHS!

The NHS is the overarching name for the National Health Service, which provides health care to citizens of the United Kingdom through its four divisions: NHS England, NHS Wales, NHS Scotland, and Health and Social Care in Northern Ireland. Conceived in 1942, the NHS came into being, with bipartisan support, in 1948.

It has been said, “the NHS may be the proudest achievement of our (British) society. It was founded in 1948 in place of fear – the fear that many people had of being unable to afford medical treatment for themselves and their families. And it was founded in a spirit of optimism – at a time of great uncertainty, coming shortly after the sacrifices of war.”2 For over 50 years, it has provided UK citizens with universal health care.

The NHS hasn’t always had a superb reputation, but no one can argue that the gains made in the last 15 years have been absolutely remarkable. In 2014, the Commonwealth Fund, an independent (US-based) organization which is well respected for it analysis of health care systems, ranked the UK as the top performer of 11 countries it reviewed.3 Of note, in that same report, Canada ranked 10 of 11, and the U.S ranked last. Importantly, the UK’s top ranking has been achieved while spending 9.3% of its GDP on health care, compared to Canada’s 10.9% and the United States’ 16.9%.4

And the NHS is aggressively pursuing further change. In 2014, it elaborated its new strategic plan, a “five year forward view.2 The system intends to push hard on issues of prevention, focus on patients having increased control of their own care, it plans to break down the barriers in how care is provided between family doctors and hospitals, between physical and mental health, between health and social care, and it plans to provide more support for frail older people.

If you have any views about the NHS, respond to the blog, or better yet, please drop by the Macklem House, my door is always open.

Thank you for this…

Thank you for this endorsement of the value of our NHS. I only wish our current government held it in similar regard. Sadly they do not value the service and seem intent on dismantling it.

That would be a shame. Certainly the external perspective of the NHS is that it is highly regarded.

While your son’s emergency…

While your son’s emergency care was obviously “state of Art”, regrettably things do not always unfold so smoothly. Our son-in-law with severe bipolar disease got a psychiatrist who, according to our daughter, gave her husband little time and when he clearly was not improving did not suggest a second opinion. It took a circuitous course that involved a colleague who is a semi-retired psychiatrist in Ottawa who connected to the prof of psychiatry at U of T to get the name of one of the premier Psychiatric groups in London. It then took nearly a year to get an appointment!
The Canadian health care system, similar to the UK one (except that private practice is against the law in Canada) is in the process of going the same way. It is currently a 4-tier system 1. The average “joe” who waits months for an appointment to see a specialist/subspecialist, get a CT or MRI etc. and spends hours in a hospital emergency dept to be seen and for whom the ER is their “family physician”. 1 million Ontarians have no family physician at all! Yet the provincial Govt is cutting funding to health care at a time when ageing “boomers” are reaching retirement age in droves.
2. Physicians and those who have a good physician friend or are “important” people with “connections”.
3. 4000 senior bureaucrats, politicians and families who are cared for rapidly at the so-called Ottawa “veteran’s” hospital equipped with the best of everything
4. The wealthy who simply get care when they need it in the US and happily pay the exorbitant bills!
Meanwhile the bankrupt (due to waste and impossible-to-keep promises made to “buy” votes during elections) ontario government is imposing fee cuts unilaterally on Ontario physicians and will not allow groups of Gps to hire young, well-trained graduates! Teachers, nurse-practitioners, nurses etc. are meanwhile somewhat “overpaid” but have unions and can and do strike, whereas physicians cannot abandon their sick patients! Government takes advantage of that fact and imposes contracts on physicians with little or no true negotiation!
Health care catastrophe is just around the corner!

Thanks for your comments. You bring up many issues, which are all complex and multifactorial. I would say, however, that it is an unhappy state which finds Ontario’s doctors at odds with the government. It would be to everyone’s best interetst if they were a way “to get back to the table”.

Dear Richard,
Your blog was very timely today for the first year FHS students (second cohort) who were attending a session on ‘Introduction to Collaborative Practice’. Concepts related to ‘patient centred care’ and collaborative care; and phrases such as patient-driven care, patients as clients and even patients as customers arose in the discussion. It was relevant to point to the changes you outlined that the NHS are pursuing, including its focus on patients having increased control of their own care, and the collaborative healthcare efforts that brought care and relief to your son.
Thank you for sharing your personal story which so richly illustrates and brings home these important principles.
Sincerely,
Rosemary Brander
Director, Office of Interprofessional Education & Practice
P.S. I am very glad that Gabriel is feeling much better!

Its nice to see that these messages are being reinforced to our students.

The Twitterverse is full of…

Its often dangerous to draw…

Its often dangerous to draw conclusions from an N of 1. That said, when the 1, is your son, it seems like definitive evidence.

I am happy that your son is…

I am happy that your son is well and he had a good experience there. I had a good time training and working in the UK, and your son’s care sounds quite typical. Every country’s health care system has its good and bad points, but I find there is a lot more scrutiny by the public/media/government in the UK than here in Canada, or Ontario at least. Certainly there is a lot more passion as shown by all the media coverage about the contract negotiations between the trainees and the government.

I as well have been impressed with the degree of passion the British have for their health system.

Physician attitudes toward their health care systems vary. “Around the clock: Insights from trusts already engaged in innovative models of 7-day care” is the title of an article in the October issue of Commentary, the monthly publication of the Royal College of Physicians and an example of UK physician support for their system, The government’s objective is to provide a 7-day service to reduce poor weekend outcomes. The physician author notes that “…hashtag campaigns set social media ablaze, 7-day services were the talk of the summer.” The article ends with the very upbeat assessment that “…irrespective of the outcome on a political level, progress toward the development of a 7-day service that benefits patients is already underway and should be celebrated.” I am sure your son would agree.

He does indeed agree. I…

He does indeed agree. I would argue that we here in Canada, should be exploring something similar. Thanks Henry.

Comparing costs of Canadian vs NHS one must take into account that there is a “2 tier” health service in the UK. where services deemed medically necessary in Canada and which cannot be legally provided outside the public health care system(although some try) can be and very often are provided by private providers–this is a huge industry in the UK, which does reduce expense for the NHS.
I emigrated from England as a child, still have many family members living there and visit it frequently. As a physician I have paid attention to their experiences and views on the NHS. Urgent/Emergency care is excellent but other care such as specialist consultation and elective surgery can be difficult to obtain for which many, including my family members seek private providers and facilities .

I am very aware of their private system, and agree, that the metric direct expenditures, as a proportion of GDP, has many nuances. Its interesting to hear your perspective that access to non-urgent care in the UK is challenging. Thanks for the comment.

Dr Reznick. Wow, this blog has generated a great response. Here is mine. I practised in the U.S. for about 30 years and agree that those with good insurance receive better care. The overall safety net in Canada is certainly better in that no one can be denied care, and people do not go bankrupt because of medical bills. I practised er medicine in the states and am doing some part time work at Western student health. I am glad to read in your note, that the student health md. and the er md. received good grades from you. Your personal blogs are the best.

John,
I will keep blogging, and thanks for the vote of confidence when I, on occasion, bring in personal stories.

I’m sure the students at Western are benefiting form your care.