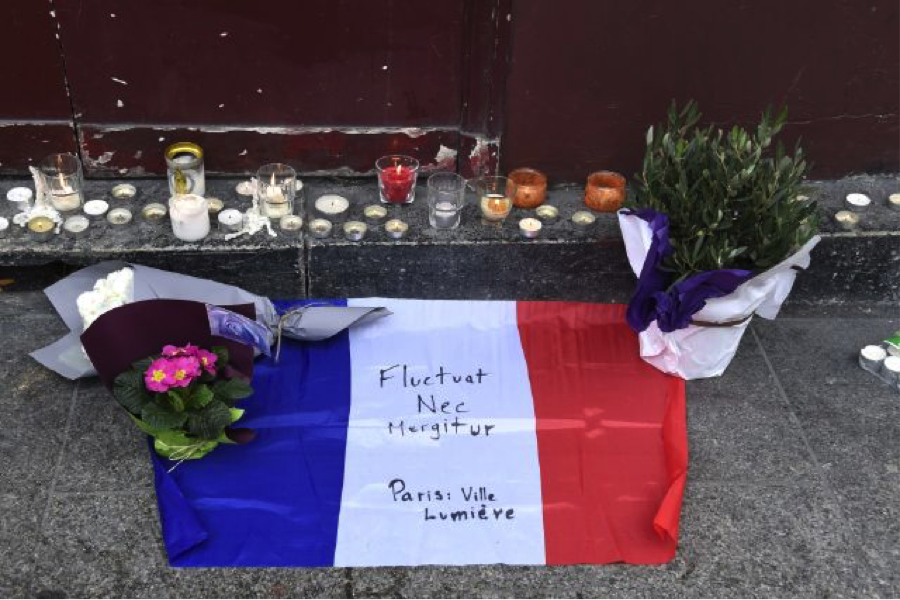 A dark day for our civilized world

The tragic events of November 13th have cast a cloud on the civilized world. The events in Paris are a staggering reminder that we live in a turbulent world. To think that lives, precious lives, could be considered expendable for what are primarily religious beliefs or territorial conflicts, is a throwback to the dark ages.

We must all speak out; not just mourn the loss of life, not just prepare to eradicate enemies. We must call on all leadership, civil and religious to take the stage.

In November of this year…

twelve died when militants detonated a car bomb on an hotel in Mogadishu,

two died when an Israeli border policeman was rammed near Halhul,

three police conscripts died and 10 were injured when a suicide bomber detonated a car bomb near the North Sinai Police Officers Club in the city of Al-Arish Egypt,

six died when a suicide bomber attacked offices in Lebanon where the Qalamoun Clerics Association was meeting,

12 people died in Iraq when multiple bombs were set off across Baghdad,

the perpetrator died when he rammed his vehicle at a hitchhiking station in the West Bank Israel,

a woman died when she stabbed an Israeli guard,

5 people died in a suicide bombing orchestrated by Boko Haram in Chad,

a 14-year-old girl suicide bomber detonated herself at a mosque in Cameroon, killing five people and injured over 20,

224 died when a Russian jet exploded in what was likely a terrorist attack,

43 died in Lebanon when an ISIL suicide bomber detonated a bike loaded with explosives,

2 people died in Israel when unknown gunmen ambushed and shot a family car,

19 died in Baghdad, from a suicide bombing, for which ISIS has claimed responsibility,

and on Friday, 137 were killed in Paris during a coordinated series of attacks.1

And we are half way through the month.

We have yet to enter into a civilized era… and history will see us as barbaric. Leaders in all countries and of all religions need to speak out.

I hope and pray none of our readers have been witness to any tragedies in the recent past. Please feel free to comment on this blog, or better yet, drop by the Macklem House, my door is always open.

A thoughtful piece. Thank you.

Nicely said Richard. It reminds of the passage by Pastor Martin Niemöller, which follows.

First they came for the Socialists, and I did not speak out—
Because I was not a Socialist.

Then they came for the Jews, and I did not speak out—
Because I was not a Jew.

Then they came for me—and there was no one left to speak for me.

Thanks for your comments…

Thanks for your comments Kanji. It’s a difficult world in which we live.

Richard, thank you for…

Richard, thank you for addressing these horrible recent events. Of course I despair for the victims, their relatives and their friends, but I also think about the first-responders and dedicated hospital personnel suddenly having to do the best they can for many wounded people. It must be difficult to train healthcare personnel for unexpected massive emergencies. I’m sure Queen’s is doing everything possible to prepare graduates/postgraduates for whatever medical/surgical challenges they may have to manage wherever they practice.

Thanks as always for your thoughtful comments. Indeed the issues for first responders are important to keep front of mind. With respect to emergency preparedness, we do have a lot of curricular elements in both our undergraduate and postgraduate education programs. For the most part, thankfully, these are simulation-based education programs.

All my best,
Richard

The lessons of the Second World War must be taught, taught and taught yet again. Cannot afford to let another generation come of age without an intimate, detailed knowledge of those terrible events and atrocities.We must elect people with far less self regard and much more personal grit and courage than we are getting these days. Humility, civility, a spine of steel, a love of the very best Western values, a willingness to stand alone when necessary and a deep knowledge of history are indispensable for leaders in times like these. We should abjure and renounce any notion of re-living the 1930s and ’40s. I shudder to think how much more evil will be tolerated by too many current leaders in the Free World.

As always, your comments are eloquently stated. Thanks for adding so poignantly to this dialogue.

All my best to you and Jenny,
Richard

And all our love to you all!…

And all our love to you all!

Perhaps some good can be salvaged from all of this by people of good will. Without a detailed understanding and knowledge of the past, the populace cannot be expected to react in a constructive way. Let’s hope these events spur on a sense of urgency by those in positions of responsibility. Surely to God there must be philosophical heirs of Winston Churchill and his ilk in the political world who can rise to and meet this terrible challenge!