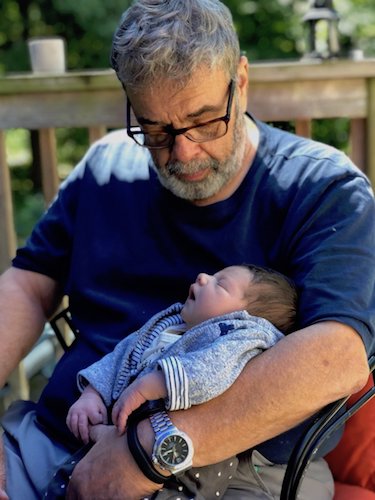 Not long after I returned from my administrative leave (sabbatical), I was taken away from campus again for what must be the best possible reason: to meet my first grandchild, Saul Arthur Schwartz.

Saul was born on July 11 in Toronto, and Cheryl and I had the tremendous joy of being in the hospital when he arrived. As she was with our daughter in the delivery room, Cheryl even got to meet Saul the second he came into the world. I wasn’t too far behind, though, as I got to see him just five minutes after that.

I suppose I might be biased, but I think that our little Saul has the greatest parents he could ask for. Cheryl and I are extremely proud of my daughter Joanna and her husband, Jordan. Joanna is a lawyer working in civil litigation at a law firm in Toronto, and Jordan has recently earned his PhD in Immunology from the University of Toronto. Clearly, Saul will have no shortage of professional role models in the house growing up! More importantly, though, Joanna and Jordan are compassionate people who will give him all the love he needs and then some.

I’m particularly touched by the fact that they chose to name Saul after my own father. In the Ashkenazi Jewish tradition, naming a child after a deceased relative is a highly meaningful display of love and respect. I cannot tell you how much it means to me that my daughter chose to honour her grandfather in this way. As I watched Joanna grow up, it gave me endless pleasure to see her develop a special bond with my father. Now that I am a grandfather myself, I hope that I can have as rich of a relationship with Saul as my father did with Joanna. As you can see from the picture above, I’m already working on it.

So far, being a grandfather has been a truly ineffable experience. It would be impossible to put all of the thoughts and feelings I have when I’m with Saul into words. But, if I had to try, I’d focus on the word legacy. From the second I met Saul, I became even surer of something I’d already known: that my family is my true legacy.

As I think about my father, my daughter, and my grandson, I can’t help thinking about a different kind of legacy as well. My father was a Queen’s student, Joanna received her Master of Public Administration at Queen’s, and I have the privilege of working at their alma mater. Sometimes, when I walk around our beautiful campus, I think about how my father must have taken the same route past Summerhill or how Joanna must have seen the same view of Lake Ontario on her way to class. Now, I occasionally catch myself wondering if Saul will grow up to carry on my family’s Queen’s legacy and walk the same paths as a student.

Obviously, I’m getting a little ahead of myself. I should probably let Saul learn to crawl before I imagine him walking around Queen’s. But whether or not he ever ends up studying here, he’s on campus all the time right now in the form of hundreds of pictures on my phone. Next time you see me, stop me and ask to see one. I always have time to talk about my grandson.

Thanks so much Cherie, it’s…

Thanks so much Cherie, it’s quite an amazing experience

Sincere congrats on the…

Sincere congrats on the arrival of Saul! What a nice way to be back after your well-deserved break.

Thanks, Claudio. The whole…

Thanks, Claudio. The whole experience has been incredible so far.

Thank you for sharing little…

Thank you for sharing little Saul with us and how proud we are that he is part of our Queens family.
We wish you and him many blessings in the years to come.

Thanks so much, Tom. All the…

Thanks so much, Tom. All the best to you as well!

Richard since I retired I…

Richard since I retired I have happily watched my 2 daughters each have a daughter. They simply bring me great joy and yes even rejuvenation. You will have fun with Saul.
Congratulations. BTW my phone memory is almost full now with every sort of baby picture

Thanks so much for sharing,…

Thanks so much for sharing, Dale. My phone memory isn't too far behind yours already!

Thank you so much, Don and…

Thank you so much, Don and Marcia.

Congratulations Dr Reznick. Thanks for sharing your happiness with all of us. Being a grandparent is one of the most extreme privileges and sources of happiness of all. Ian

Thank you so much, Ian. I completely agree about the joy and privilege of being a grandparent.

Congratulations to parents and grandparent.
Our oldest grandchild was married last month...a happy event!
I predict your life will forever be changed.

Thank you, Brian. And…

Thank you, Brian. And congratulations to you on your grandchild's wedding!

Welcome to the best club in…

Welcome to the best club in the world Richard.

Thank you, Jim. It's been already been so great.

Congratulations to you, Cheryl, Joanna and Jordan. Saul and you look pretty thrilled!

Thank you, Terry. Thrilled is an understatement!

Looks great on you…

Looks great on you. Wonderful feeling isn`t it? Congrats and best wishes to all your family.
Ken and Dianne

Thank you for the kind words…

Thank you for the kind words, Ken and Dianne. It's pretty much the most wonderful feeling there is.

Congratulations fellow grandfather (5 grandsons). I know you will enjoy being a grandfather as much as we do as well as the pleasure of watching him grow up

Thank you, John. I'm already enjoying being a grandfather so much, and it's only been getting better.

This is so sweet! Thank you…

This is so sweet! Thank you for sharing and congrats! I became a mother three years ago and there is nothing like it in the entire world. Enjoy every second!

Thanks, Andrea! There really…

Thanks, Andrea! There really is no better feeling.

Congratulations to you, Cheryl, Joanna, Jordan and of course Baby Saul. What a wonderful addition to your family!
Alice

Thank you so much for your kind words, Alice. He really is as wonderful as can be!

congratulation Dr Richard I can see your happiness about saul in your face...May God bless your family

Thank you very much, Derejie…

Thank you very much, Derejie. All my best to you and yours as well.