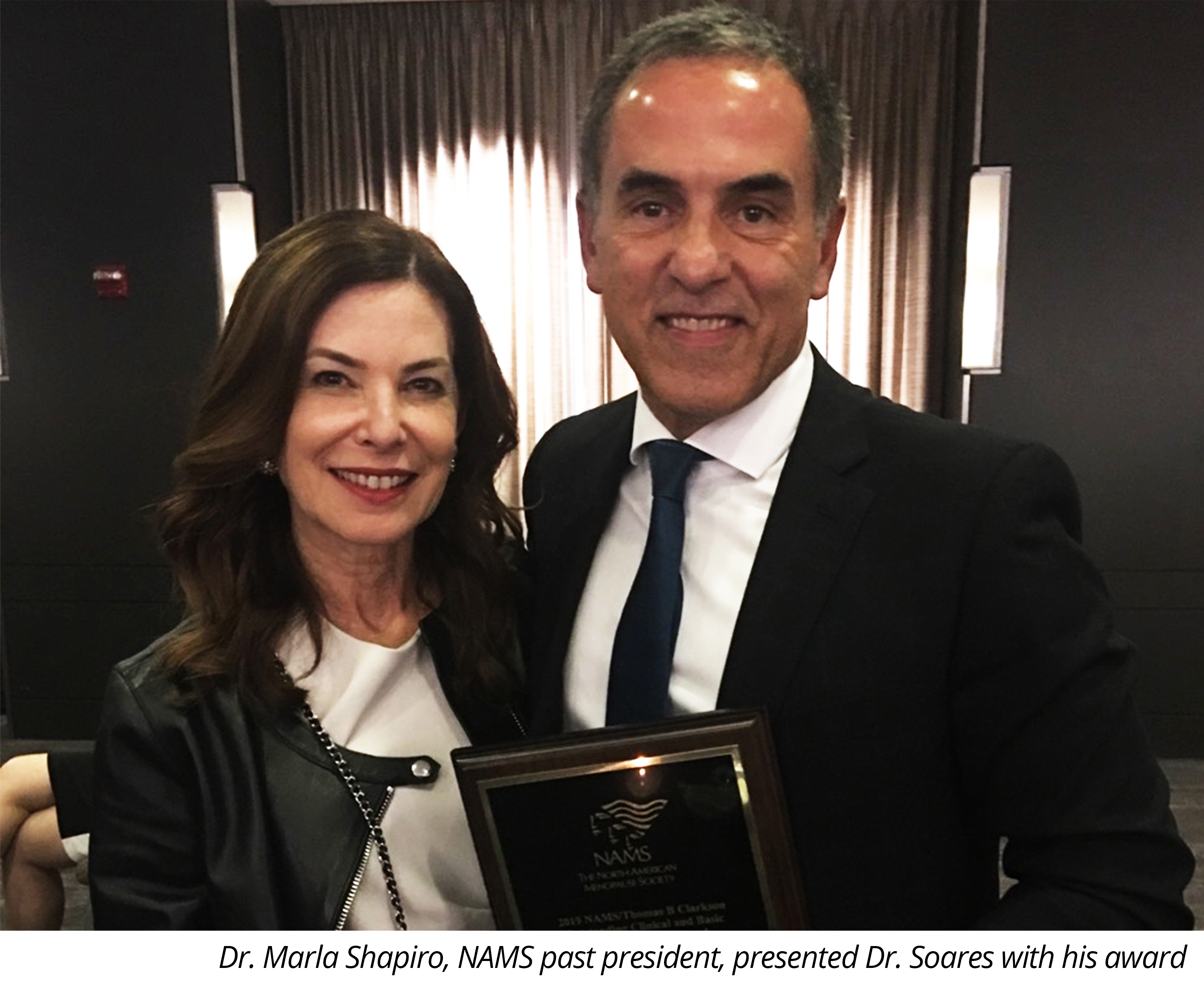 For middle aged women experiencing menopause, the struggle to have their symptoms and side effects acknowledged is real. These symptoms can include hot flashes, chills, irregular periods and anything from anxiety and fluctuating moods to clinical depression.  In 2015, The Guardian argued that the healthcare system is failing women who are peri- or post-menopausal: “menopausal symptoms are primarily a result of oestrogen deficiency; in the peri-menopause, which can commence several years earlier, fluctuating hormone levels are largely to blame. One in four women will experience debilitating symptoms that can last up to 15 years.”

And it turns out that a subset of women may be particularly vulnerable to depression around the time of menopause as a direct result of these hormonal changes.

Dr. Claudio Soares, head of the department of psychiatry in the Faculty of Health Sciences started doing research in this area almost 20 years ago. And last week, he earned a major award for what he discovered. Dr. Soares’ foundational studies for the treatment of perimenopausal depression research earned him the 2019 Outstanding Clinical and Basic Research Award from the North American Menopause Society.

According to Dr. Soares, the role that hormones play in perimenopausal women’s health, and in particular their mental health, is not well enough known among doctors who graduated in the past 10 to 15 years. That’s because of the highly publicized results of the US Women’s Health Initiative (WHI) trial, published in 2002, which suggested that women taking hormone therapy could face more health risks - especially for breast cancer - than health benefits.

The initial interpretation of the WHI results led to a state of panic among patients and some doctors, and to a significant drop in women taking hormone therapy. “A full generation of physicians have been trained to be less aware of effects of hormones on brain, heart, and bone health–and depression–and to be very cautious or even sceptical of the benefits of hormone therapy,” says Dr. Soares, “and instead be only focused on the negative effects.”

Dr. Soares’ research identified a role for individually tailored hormone therapy. In other words, for some women, the benefits do outweigh the risks.

The group that Dr. Soares focused on was women in their late 40s or 50s who experienced chaotic fluctuations in hormone levels and were prone to depression. The most vulnerable were women with a previous major depressive disorder, and those who suffered from premenstrual mood symptoms or post-partum depression.

When he began his research almost two decades ago, there was little attention paid to the ‘brain aspects’ of menopause. Dr. Soares says he and others were sometimes accused of pathologizing menopause, or perhaps more accurately re-pathologizing it.

Menopause is a normal condition that all women experience as they age. And before the WHI trial results, hormone therapy was quite widely prescribed for menopausal women to address hot flashes and vaginal dryness. But it was also heavily promoted - perhaps overly so - for its purported “anti-aging” capabilities.

Now more than a decade later, more doctors are becoming aware that there is no “one size fits all” hormone therapy for women experiencing menopause, and that there can be a role for different types, dosages, and durations of therapy depending on the issue.

But he says that still today when middle aged women come to their doctors complaining of a significant increase in irritability, mood swings and anxiety, “you’d be surprised how infrequently physicians ask whether there is any association with their hormonal changes or menstrual cycle changes.”

Physicians may ask if depression is getting worse, but they may not connect the dots about how hormonal changes could be making these women more vulnerable. Instead, doctors often focus on the possible role of iron deficiency, thyroid conditions, changes in life circumstances, and stress at work.

Dr. Soares is gratified that the Canadian Network for Mood and Anxiety Treatments has recognized the role of hormone therapy as a treatment for peri-menopausal depression, driven primarily by the results of his research. In the CANMAT’s 2016 guidelines for women with peri-menopausal depression, estrogen delivered through a skin patch has been recognized as a treatment, along with other conventional treatments such as antidepressants and psychotherapies.  With that, it will be more likely for women who do need hormone therapy to be able to access it.

Depression in humans can take more than two dozen forms. Naturally, clinicians and researchers are keen to better identify types of depression in order to better predict and diagnose particular vulnerabilities and thereby improve treatment.

Dr. Soares’ work has brought women who suffer from depression related to menopause one step closer to the treatment they need, and is paving the way for a change in how physicians interact with their female patients.

This past week, Dr. Soares was in Chicago to accept his award. I couldn’t think of a more fitting tribute to a researcher who persevered in the face of criticism to create a better outcome for patients.

Please share your thoughts by commenting on the blog.

Congratulations to Dr. Soares for his work and for this award!
And thank you to Dr. Reznick for highlighting it.
Somewhere between the extremes of 'over-pathologizing' vs. dismissing women's hormonal concerns (and their relationship to mental health) lies a rich zone of useful inquiry which merits open-minded attention from researchers & clinicians, in the service of improving women's quality of life. It is encouraging to hear of work being done in this area.

Dr. Goodwin, thanks so much…

Dr. Goodwin, thanks so much for your comment. You have very nicely defined the intricacy of the issues.