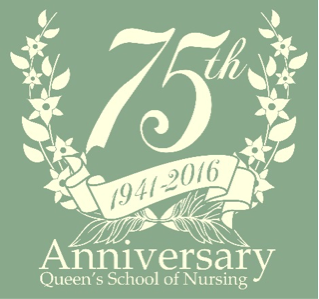 Guest Blog by Professor Jennifer Medves,
Vice Dean Faculty of Health Sciences and Director of the School of Nursing

The School of Nursing is celebrating a milestone 75th anniversary this year. Compared to other nursing schools in Canada, Queen’s has a long history. The first program based at a Canadian university was in 1919 at UBC. The School of Nursing at Western was established in 1920, and the University of Ottawa in 1933. The University of Toronto was the first to develop a 4-year degree program funded by the Rockefeller Foundation. This was the year after Queen’s School of Nursing was founded. Interestingly, according to King (1970), Queen’s was approached in the early 1900’s to start a university program and as with other universities declined.

Fast forward to 1941 and the Senate documents confirm that a nursing program would be established. The early history of the program is well documented in the monograph Breaking Down the Walls. Principal Wallace seems to have been a major figure in bringing nursing to Queen’s, nursing students were registered prior to appointing the first director in August 1946. The first Director, Ms. Riches, reported directly to the principal as opposed to the Dean of Medicine. Interestingly, the first class in the Course in Nursing is not recorded. The first two candidates were awarded the Bachelor of Nursing Science in May 1947. In 1948, 10 students graduated and their photograph hangs in pride of place in the School of Nursing. Ms. Riches does not appear in any other pictures as she resigned in 1949 to start her married life.

The School of Nursing was initially housed in Kingston Hall and moved to Summerhill in 1960 where it remained until 1982 when it moved to the Cataraqui Building. Today, we are searching for a replacement building as the Cataraqui Building does not meet the needs of the School. It is cramped, poorly heated and cooled, and simply far too small for the student, staff and faculty complement.

We started our celebrations with the Kingston Nursing Student Conference 6th and 7th November 2015. The next event is a dinner in on March 31st, 2016, a music event in September 2016, and finally the Queen’s Joanna Briggs Collaboration Conference of the Americas at the end of September 2016. We will also be co-hosting a historical exhibition with the Museum of Health Care in the winter term of 2016.

Healthcare today is significantly different than in 1941. However, the fundamentals of nursing have not changed. Our by line for the School Caring to Learn: Learning to Care summarizes the core of nursing practice. Nurses care. Educating the next generation of nurses is always challenging because of reduced clinical opportunities in hospitals and a complicated system of care in the community. A good placement one month may be completely different in home care if the agency with the contract changes. With changes to home care now expected because of the dismantling of CCAC’s this becomes even more difficult.

Expanding and changes to scope of practice challenge educators to be nimble and adaptable. One example is the removal of Tramadol® to a different status. Nurse practitioners cannot prescribe this drug and so the students need to be notified and we need to teach them how to adapt to this situation. Recently the premier announced that Registered Nurses would be authorized to prescribe. We believe that to prescribe without the authority, and knowledge, to diagnosis is inappropriate and potentially very dangerous. The Health Professions Regulatory Advisory Council is now examining the issue but faculty in education programs are already consulting and discussing this potential major curriculum change that would be required to accommodate this expanded scope of practice.

If you have any comments about the School of Nursing, please respond to the blog, and as with Richard’s door, mine is always open – keeps heat in my office – so please drop by.

Vice Dean/Director/Prof. Jennifer, I was delighted to see your 75-year School of Nursing contribution to the Queen’s Dean On Campus Blog. It filled in many things I didn’t know about its evolution.

I assume it was not part of your intent to not give at least minor reference to the legacy of Kingston General Hospital non-BSN nursing students and their contributions to healthcare. Maybe that will be addressed by the Museum of Health Care in the Winter Term of 2016 for which you didn’t provide a link. I will be very interested to see if that covers what you didn’t.

I fully appreciate the current challenges that nursing educators/mentors/students/graduates are facing but am confident that all will work out well for the benefit of patients.

All the best, Bill…

Full Disclosure: My mother and wife were very well nursing-trained at KGH before/during the transition to having a BSN degree, which now seems to be required, or even a Master!s degree, to advance thei careers. Will the people they manage have the same high dedication to their patients or their careers? I don’t mind saying it: Canadian Nurses have done very well at the bedside as other less-motivated employee seem to think that is not their job. Maybes this is commercialism.

Thank you William for your comments. The Queen’s School of Nursing has always been independent of the hospital training school system. Some of the early graduates were part of the sandwich programs and we will be focusing on their experiences in the Museum of Health Care exhibition. The graduates of the School go on to have wonderful careers in nursing, most remain in direct patient care as a staff nurse, as a clinical nurse specialist, or more recently as a nurse practitioner. The graduates are fully engaged in direct patient care – that is why they chose to be nurses. We do encourage continuing professional development – for some this is courses such as critical care nursing, for others it is graduate school. I agree with you that Canadian Nurses are some of the best educated in the whole world and it is all about caring for patients where ever they need nurses.

At last a mention of the…

At last a mention of the anniversary of the Queen’s School of Nursing. Thank you to Professor Jennifer Medves for her words,, appreciated by all graduates of the School including me and my sister Marilyn Rydrer. Let’s hope that she and the a school will soon have a new home on campus so that her door is nor open just so she can keep warm!
Happy birthday to our School.

Thank you Patricia for your comment. 75 years as a university School of Nursing is an achievement that we will have fun celebrating this year. The heating/cooling specialists work hard to keep our building at an appropriate temperature but it is the nature of temporary buildings in that they were not designed to out live themselves. Best wishes to you and your sister. Please do check out the Queen’s Nursing Project and tell us more about your nursing careers

It is with pleasure and…

It is with pleasure and pride that I read of the 75th Anniversary celebrations of our School of Nursing at Queens. As a graduate from the “sandwich” program in the 60’s, under the leadership of Jenny Weir, it was a good foundation for a leadership role in our profession. However, when the four year program was developed, and Dr. Hill at the helm, I felt that the School of Nursing took its rightful place as a professional program, with a much stronger academic base, integrated with professional practice. Thank you, Dr. Medves, for your continuing leadership, and the emphasis on research and evidence-based practice. Our class of 1962 makes regular pilgimages to our alma mater, and we’ll look forward, hopefully to new and improved quarters for our School of Nursing.

Thank you Beverley for your endorsement of Dr Hill’s leadership. The School of Nursing faculty, students and staff owe her a huge debt of gratitude for her far reaching vision of nursing education. I am interested in your experiences in the sandwich program as these models are being highlighted in our Museum of Healthcare exhibition that will be on display in late March and early April of this year.