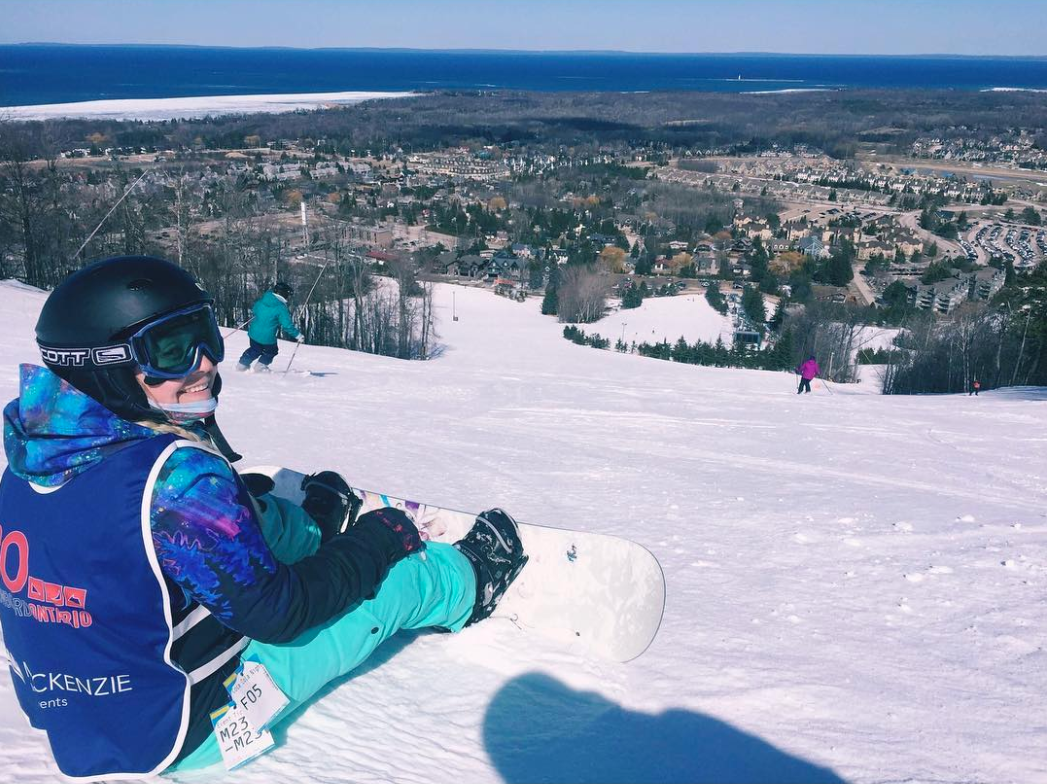 In 2017, Sarah Anne Cormier, a fourth-year undergraduate student in the School of Nursing, attended the Paralympian Search in Toronto in order to try out for running teams and development programs in Canada. While she was undergoing numerous tests of her running ability, she was also asked to fill out a form that asked her what other sports she participated in. Sarah had been snowboarding for years, but she didn’t think she should put it down. She had never really snowboarded competitively, and she didn’t want to be misleading.

Sarah took the advice, and filling out that form ended up changing her life. Because now she’s training intensely to make it onto Team Canada, with the goal of competing in the 2022 Paralympics in Beijing.

After the Paralympian Search in Toronto, Sarah was invited to a snowboarding development camp in Blue Mountain, where she made an impression on the Canadian coach for Paralympic snowboarding. The coach told Sarah that he thought she had real potential, and that he wanted to train her. Sarah agreed, and shortly thereafter started an intense training regimen for the sport.

In the summer, when there is no snow for Sarah to train on, she works on strength and conditioning in the gym five days a week. In the winter, when she can actually snowboard, she still trains four days in the gym on top of getting on the snow every chance she gets. Sarah estimates that this winter she has spent 50 days training on the slopes.

One of Sarah’s strongest motivations to undertake all this training – on top of her rigorous academic schedule in the School of Nursing – is to help inspire other disabled people to know that they can achieve more than they probably realize.

Sarah was born with complications from amniotic band syndrome, a condition that occurs when a fetus becomes entangled in the amniotic bands of the womb. As a result of this condition, Sarah was born missing her left leg below the knee as well as having various finger amputations on both of her hands. She has had to undergo seven surgeries throughout her life to address the complications caused by the syndrome.

When she was five, her parents signed her up for Track 3, a non-profit organization that teaches children with disabilities how to ski. Sarah loved skiing, but when she became an adolescent the sport made her feel self-conscious. When Sarah skied, she did not wear her prosthetic leg, but instead used outriggers as support for balance.

This system worked great, but when Sarah was 12 she started to get uncomfortable with the feeling that people were giving her unwanted looks when she skied on one leg. She didn’t want the attention that came with skiing, but she also didn’t want to give up winter sports.

Sarah found an answer to her dilemma: snowboarding.

If she took up snowboarding, she realized, she’d be able to wear her prosthetic leg. She asked her parents if she could take up the sport, and they agreed.

Even though she has been snowboarding now for sixteen years, Sarah feels like she still has a lot to learn. “Right now I’m trying to break sixteen years’ worth of bad habits,” she says. But with the help of her coach and teammates, she also feels like she’s making significant progress.

And it’s clear that her hard work is paying off. In January, Sarah competed at her first provincial race in Bromont, Quebec. Even though she felt nervous to be competing, she didn’t let her nerves get the best of her: she won silver the first day of the event and gold the second day.

But Sarah is well on her way to making her dream come true, and all of us in the Faculty of Health Sciences are proud of her and are rooting for her.

At the same time, Sarah says she could never have achieved what she has so far without the support of the School of Nursing.

Sarah is currently halfway through her placement in the ICU at Kingston General Hospital, and she loves how much she learns there every day. Even though her schedule can be hectic as she tries to balance late nights in the hospital with long training sessions in the gym and on the slopes, Sarah says the Nursing faculty and her fellow students always do what they can to help her. When she has to be away from home for long stretches, her friends from the school will even come walk her two dogs, Odin and Atticus.

Sarah will graduate this May, and I’m very happy to share her story with you. Mostly because it is so inspiring, but also because it shows how well rounded our students at Queen’s can be. Even though we have the most dedicated students in Canada, they’re also often people who are pursuing additional passions outside their studies. And this is something that we embrace and encourage in the Queen’s Faculty of Health Sciences.

Before I go, I also want to share the video below with you. Sarah was gracious enough to be interviewed last year for a video series about being an Indigenous nursing student at Queen's, and it's well worth watching.

If you want to keep up with Sarah’s progress toward her snowboarding goals, you can follow her on Instagram @sacorms12.

What passions do you pursue outside of your studies or work? I’d love to hear about them in the comments below. Or better yet, please stop by the Macklem House: my door is always open.

Thanks Richard and Andrew…

Thanks Richard and Andrew for your inspirational blog about Sarah. Incredible dedication to her sport and chosen field of Nursing! I wish her best success and continuing to serve as an outstanding example of who Queen's Faculty of Health Sciences wants to attract and nurture for both personal and professional development.

Thanks for reading, Bill…

Thanks for reading, Bill. Sarah is truly an inspiration to all of us in the Queen's FHS community!