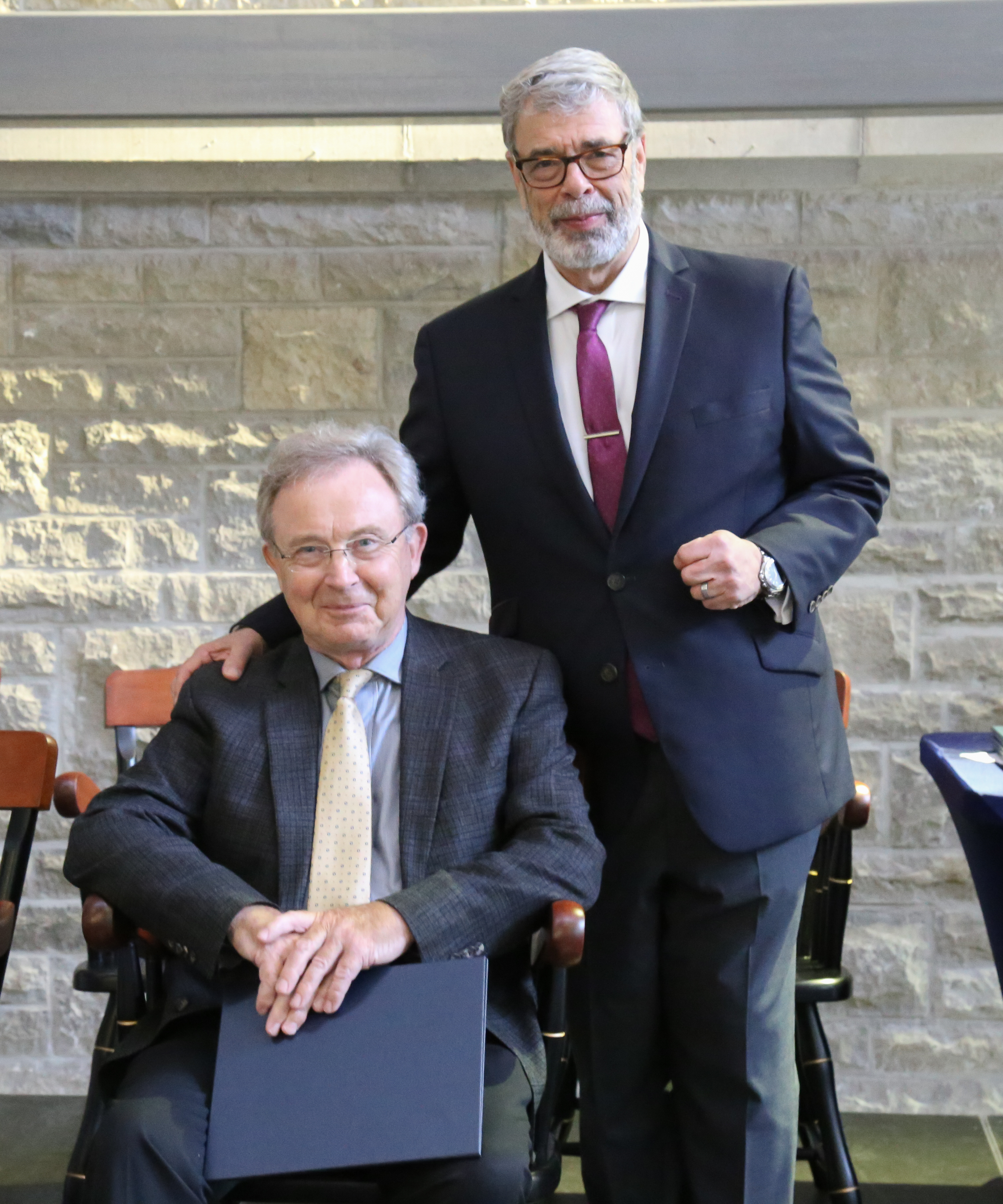 How Dr. Roger Deeley built a legacy of research strength at Queen's and KHSC

When I came to Queen’s 9 years ago, I never would have expected that the person who I would work with most closely and most intensely would have been Roger Deeley. You wouldn’t normally find a colorectal surgeon who has a focus on competency-based medical education spending a great deal of time with a world-famous cancer biologist.

In most of our interactions, I’m the student and he’s the teacher. To be sure, I have learned a tremendous amount from Roger.

Roger has an incredible ability to tackle complicated issues. He does this by bringing calm and clarity to the issue at hand. He is incredibly thoughtful; every time he says something, he’s thinking at a strategic level. If 747s fly at 30,000 feet, Roger is a Concord, flying at 50,000 feet.

One thing we will all miss is Roger’s vast knowledge. He is probably more well-informed about research in Canada than any other person I know. And this has been to the huge benefit of our researchers here at Queen’s. He takes the time to know our researchers and to make connections. His grasp of the specifics of every one of our scientists and what they do, their strengths and needs, is Watson-like.

And make no mistake, he’s an unbelievably hard worker. In our quest for excellence in health care research, Roger has been an integral driving force.

The amount that he’s done for this faculty is incalculable. He served brilliantly as our Vice-Dean Research in the Faculty, but he’s also helped build the research institute at Kingston Health Sciences Centre and strengthened the commitment and approach to research at the hospital. He founded the Queen’s Cancer Research Institute, helped build it and was its Director for a decade. He has overseen our strategic research plan and led our Industry Engagement Strategy. Since research touches everything we do: from SEAMO to the hospitals to our academic mission at the University, Roger has been a glue that’s helped bind us all together.

As most of us have seen Roger in his administrative capacities, as a Vice-Dean and a Vice-President, what many people don’t know about Roger is that he truly is a world-renowned cancer biologist. If you don’t believe me, let me tell you about a few of the awards and accolades Roger has received over the years. In 2005 he won the Robert L. Noble Prize of the Canadian Cancer Society & National Cancer Institute for outstanding achievements in cancer research. He was awarded the National Cancer Institute of Canada Diamond Jubilee Award for outstanding impact and contribution to the field of cancer research in 2007. In 2013 he was named a fellow of the Canadian Academy of Health Sciences, and in 2014, he became a fellow of the Royal Society of Canada. These major accomplishments only brush the surface of what Roger has achieved in his career.

But of all of Roger’s great qualities and accomplishments, the one that I admire most is his passion for his family. Roger and his wife Shelagh McDonald live on Howe Island with their dog Vinnie, but they often have company, whether it’s their children and their partners, or their grandchildren who are an enriching presence in his life….perhaps with the exception of when his kids leave all the grandkids with he and Sheila for 3 weeks in the summer.

Please join me in congratulating Roger on his well-deserved academic leave and retirement by commenting on the blog.

A historical comment. The rapid technical advances in recombinant DNA technology in the USA in the 1970s out-paced many of us in Canada. For example, Professor Tak Mak in Toronto took a sabbatical in Wisconsin with 1975 Nobelist Howard Temin. Roger arrived at Queen's fresh with tablets of NIH wisdom which he generously shared. He kindly took me into his laboratory for a mini-sabbatical and transformed my research program. Soon Tak Mak's team was cDNA cloning the elusive T cell receptor and mine did likewise for the genes that are transcribed shortly after the T cell receptor is activated! These advances in immunology led to the modern era of cancer immunotherapy and a better understanding of autoimmune diseases. Bravo Roger!

Dr. Forsdyke, What a great…

What a great story. Thanks for sharing your perspective. You and I are on a long list of “Roger fans”.