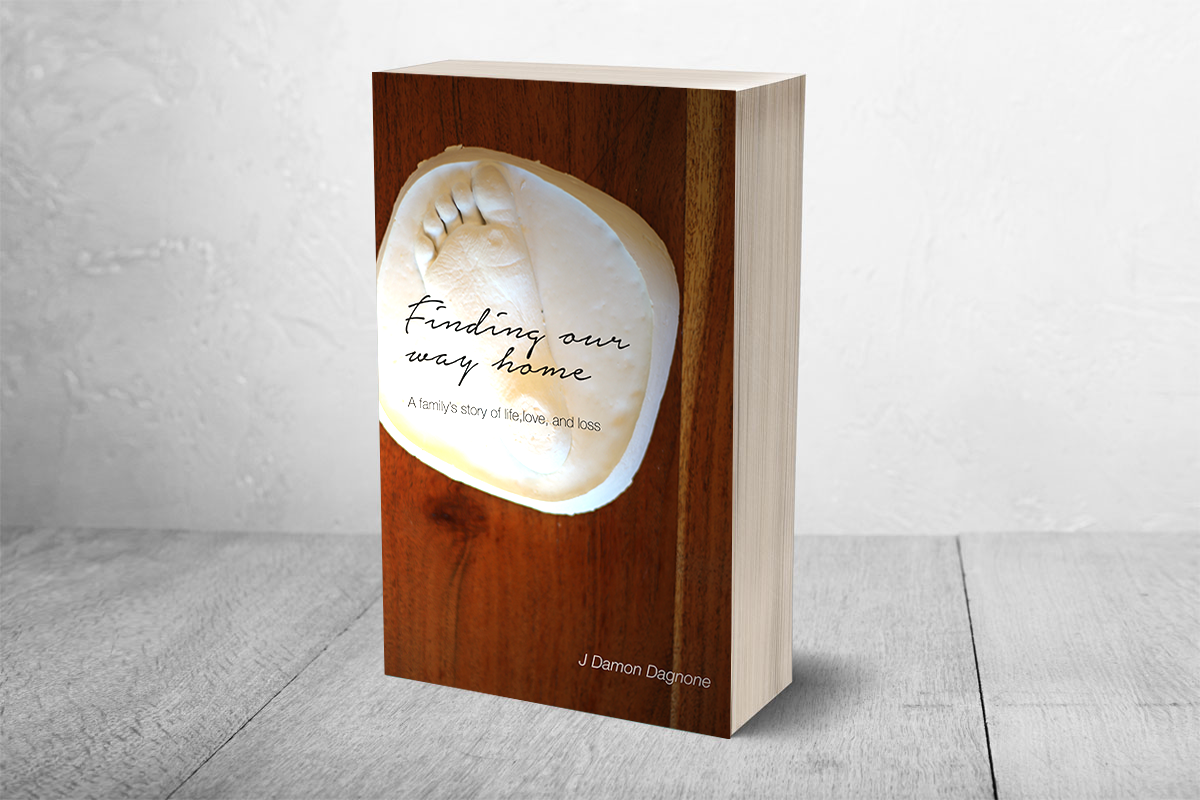 I’m pleased to let you know that Dr. Damon Dagnone – Associate Professor in the Department of Emergency Medicine and our CBME Lead – has recently published a memoir called Finding Our Way Home: A Family’s Story of Life, Love, and Loss. Damon was kind enough to share the manuscript with me before it even came out, and I don’t know if I’ve ever finished a book faster. Damon’s story is almost impossible to put down once you start, and it is even more moving than it is gripping. I had always known that Damon was an excellent physician and educator. But, I have to admit, I didn’t realize before reading his book that he is such a powerful writer as well.

I wish, though, that Damon had been able to write a much more boring book. Because no one should have a story as heartbreaking as that of Damon and his family. In 2006, Damon lost his 3-year-old son Callum to cancer. His book takes us through the agony of that whole experience, from the terror caused by the initial diagnosis to the crushing grief caused by Callum’s death. As devastating as these parts of Damon’s story are, though, there’s also hope and inspiration in the book. He shows us his family’s pain, but he also shows us their growth and recovery.

At the beginning of the book, Damon tells us about a vacation that his family took to Disney World. The trip was just as fun as they were hoping, except for a strange health problem. During the vacation, Damon and his wife Trisha noticed Callum vomiting three times without any obvious explanation. While this vomiting was suspicious on its own, it was even more alarming given that Callum also hadn’t gained much weight in the previous six months.

When they took him to the doctor to try to figure out what might have been causing the problem, they learned that Callum had a brain tumor. When he and Trisha heard the diagnosis, Damon says that “Our hearts stopped and life changed forever.” They then started on an agonizing journey of surgery, procedures, chemotherapy, and long, long stays in the hospital. Tragically, Callum died on November 11, 2006.

The section of the book dealing with Callum’s illness is very powerful, to say the least. Damon describes in aching detail having to watch his son struggle – always with amazing bravery – through the cancer and the chemotherapy. With this story, Damon gives us an important look into the lives of families who find themselves practically living in hospitals, their lives completely shattered by the illness of a child. For those of us in the healthcare community, Damon’s experiences are a striking reminder of just how vulnerable our patients and their loved ones can be when they come to us. Damon’s story also emphasizes just how comforting a compassionate doctor can be, and just how lost and confused a seemingly distant one can make you feel – even when, like Damon, you’re a physician yourself.

But there’s another side of this book too: the story of Damon and his family slowly recovering from their loss. Damon shares many of the milestones they pass on their way to recovery, such as painful anniversaries, making new routines, holidays without Callum, moving to a new house (to get away from oppressive memories), finding meaningful ways to commemorate their lost son, and adopting their daughter.

As a fellow healthcare professional, I was perhaps most affected by the story of Damon returning to medical practice, especially because it wasn’t always clear to him that he would. Here, we see Damon wrestling with this decision shortly after Callum dies:

Moving forward meant going back to work. It was a big step. The thought of the many responsibilities waiting for me was daunting, and working again necessitated being away from Trisha and Thai for long periods of time. A major issue was that I had no idea if I was still capable of practising Emergency Medicine. Being an ER physician is a demanding job, and I was worried I might have lost the expertise and emotional reserve to care for patients and families the way they deserved. Would I be able to see patients in the same rooms where Callum had been, and interact with the nurses and physicians who had looked after him? I’d have to care for and counsel patients and parents facing life-threatening illnesses, and I didn’t know if I had it in me.

Luckily, Damon realized that he still had it in him, but his path back to medicine wasn’t easy. As he tells in the book, he needed to ease his way back into the emergency room and, sometimes, having to deal with patients in critical situations could be nearly overwhelming. In one highly moving scene from the memoir, Damon describes treating a critically ill child – a girl who was the same age as Callum had been when he died – for the first time since his son’s death.

As he worked to resuscitate her, Damon says, “I forced my mind to stop sending me visions of Callum so I could focus on her.” When the girl was finally in stable condition, Damon needed to excuse himself to the on-call room, where he “cried for five minutes straight” because, he says, “all the pain I’d felt at losing Callum had come back with an intensity I hadn’t experienced in months.”

It’s moments like these that make Damon’s book not only powerful but timely. His story shines a light on something that I think we forget too often in healthcare: that doctors are people first and foremost and that, as people, they can suffer. With his book, Damon reminds us that physicians sometimes need to be given space and time to be vulnerable, to grieve, and to recover. In our profession, we’re finally having meaningful conversations about physician wellness, and Damon’s book is an essential contribution to this discussion.

Damon’s book isn’t light reading, but it’s necessary reading, especially for those of us in the healthcare community. Really, though, his story will speak to anyone whose life has been affected by illness or grief.

Thank you, Damon, for sharing your personal journey with all of us. Writing this book was truly an act of bravery, and we’re all better off for your courage.

Thank you, Tracy. If you…

Thank you, Tracy. If you liked the blog, I strongly urge you to read Damon's book. It's truly remarkable.

I saw the book announcement…

I saw the book announcement last week and, as a fellow author connected to the School of Medicine, noted his name, since I'd never met him. Last week, my husband suffered an arterial hemorrhage connected to his throat cancer treatments and who should be the ER Physician on Thursday night, but Dr. Dagnone! He was incredibly kind, reassuring, and the epitome of what you'd hope for in a physician. He has definitely, at least professionally, "found his way home". Thank you, Dr . Dagnone. I wish you every success with your book (although, I suspect it has already had a posituve place in your own healing journey).