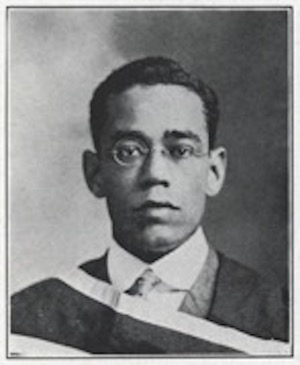 If you have been following my blog for the last year, you may be aware that in 2018, it was brought to light that the Queen’s School of Medicine (then Faculty of Medicine) banned Black students in 1918. And while the ban had not been enforced since 1965, it remained on the University’s books as an official policy. So in October 2018, the Queen’s University Senate formally repealed the ban on black medical students. But I knew that we needed to do more. In April 2019, then Principal Daniel Woolf and I issued a formal apology to those who had been affected by the ban.

Ethelbert Bartholomew was one of the Black students enrolled at the time of the ban, and he had completed nearly all of the necessary work to earn his MD. But because of this policy, he had to leave the school before graduating. Unable to secure a spot at another medical school, he supported himself and his family working as a sleeping car porter for the Canadian Pacific Railway.

Ethelbert’s son, Daniel Bartholomew, attended the public apology in April 2019. And while he was touched by this action, he requested the University take another symbolic step to address a historical injustice. And so, at the 2019 Spring Convocation, Queen’s presented Ethelbert D. J. Bartholomew with a posthumous MD, 101 years after he was pressured to withdraw from the Faculty of Medicine.

There were fifteen black students enrolled in the Queen’s Faculty of Medicine at the time of the ban with fourteen physically present on campus. Half of these students left shortly after the ban was introduced. Despite the promise of continuing their education elsewhere, the University did not help them secure spots at other Canadian schools. Most of these students completed their medical education in the United Kingdom. The other half fought to continue their education at Queen’s, despite constant pressure from the Faculty to transfer elsewhere. The last of these enrolled students graduated from Queen’s in 1922.

One of the most damaging consequences of the ban was that the Faculty of Medicine failed to acknowledge the accomplishments of those black alumni who graduated during the early twentieth century.

Today, in honour of Black History Month, I want to share with you the names of four students; three are alumni who graduated from the Faculty of Medicine. These stories are but a small sample of the illustrious careers of black alumni who received their MDs from Queen’s before the ban was enacted.

Dr. Ligoure graduated from Queen’s before the ban and established his practice in Halifax, N.S. Unable to secure hospital privileges, he set up an independent surgery at his home in the city’s north end. He became the publisher of the Atlantic Advocate and used this position to advocate for the formation of the No. 2 Construction Battalion. In 1917 when the Halifax Explosion killed 2,000 and injured 9,000 people, he set off to tend the injured, using his home as a local dressing station where he successfully treated hundreds of injured persons over the next several days.

Dr. Cummings rose to prominence as a co-founder of the Barbados Labour Party in partnership with Sir Grantley Adams. He became the second premier of Barbados and played an instrumental role in revoking the Island’s predatory Located Labourers Act.

Dr. Skeete left Queen’s immediately after the 1918 ban. He would eventually graduate from Tufts University and establish his medical practice in Nassau County, N.Y. In the 1940s, he became the first president of a local chapter of the National Association for the Advancement of Colored People, which played a pivotal role in confronting Long Island’s infamous regime of racial segregation.

John was born in Bremuda and attended the Bertley Institute, graduating with a Senior Cambridge Certificate. He joined Queen’s Faculty of Medicine in 1913, in the class of 1917. Jack was an excellent violinist and an enthusiastic member of his class. He was a member of the Freshman Year Executive. John died in a canoeing accident on August 12, 1916, just on year before completing his MD.

There are many more stories that I have not included here, but I hope that in reading this blog, you have taken a moment to reflect on these four students who walked through our doors over 100 years ago. Nelson Mandela once said, “Education is the most powerful weapon which you can use to change the world.” And Drs. Ligoure, Cummins and Skeete did just that.

Please share your thoughts by commenting on the blog, or better yet, drop by the Macklem House…my door is always open.

Thank you for bringing this…

Thank you for bringing this shameful chapter of Queen's to light. While no apology to these students or public recognition can undo the injustice done to these students, it represents an important gesture. If we are going to be better and more just in the future, we must acknowledge our errors of the past.

Thank you Wayne. I agree…

Thank you Wayne. I agree with your sentiments.

I enjoy reading all Dean's…

I enjoy reading all Dean's articles, especially historical ones like this. Why did the Queen’s School of Medicine (then Faculty of Medicine) ban Black students in 1918? Much progress has been made since then but there is always room for improvement, which Queen's is trying to do so well.

It's a long and shameful…

It's a long and shameful story Bill. The stated reason reason was that returning World War I veterans did not want to see Black medical students taking care of them in the hospital. But this was actually false.The real reason was that the school was seeking a high rating so it could access funding from the Carnegie foundation. One of the criteria for a high rating was having no black medical students. A sad moment in Queens history. Richard

An equally shameful legacy from the Carnegie foundation

A sobering reminder of a…

A sobering reminder of a shameful aspect of our past. Highly appropriate that a diligent and determined approach was made to draw our attention to this now unimaginable institutional behaviour and to publicly apologize.

Thanks Andrew, I agree…

Thanks Andrew, I agree completely.As I reflect back on what is now almost 10 years is Dean,I can't think of a more impactful moment than making that public apology. It will truly be one of the things I remember most about my tenure.

An excellent read ! Thank you for re-visiting this sad historical chapter of Queen's and sharing again with us this month. It was satisfying to read how people moved on despite the difficulties encountered. A true lesson in resilience !

Jenny, Thanks for your…

Thanks for your comments. I couldn't agree more.It's truly unimaginable how Queen's committed to training these students and then reneged, likely because of financial issues.

Queens University should establish 1 or 2 Scholarships for Black students to study Medicine as a small gesture in acknowledging this wrong. It will serve as a reminder and show signer a visible effort of how Queens has evolved in dealing with this.

Ade, I agree with you, and…

I agree with you, and just this past year we instated an admission award for Black Canadians entering our medical school. You can find out more here: https://www.queensu.ca/studentawards/award-list/named-bursaries/medicine-admission-bursaries